Solar and stellar science with ALMA

The capability of measuring the temperatures of the gas in the Sun’s chromosphere with the Atacama Large Millimetre/sub-millimetre Array (ALMA) opened new scientific avenues that laid the foundation for a new branch of research activities at RoCS. 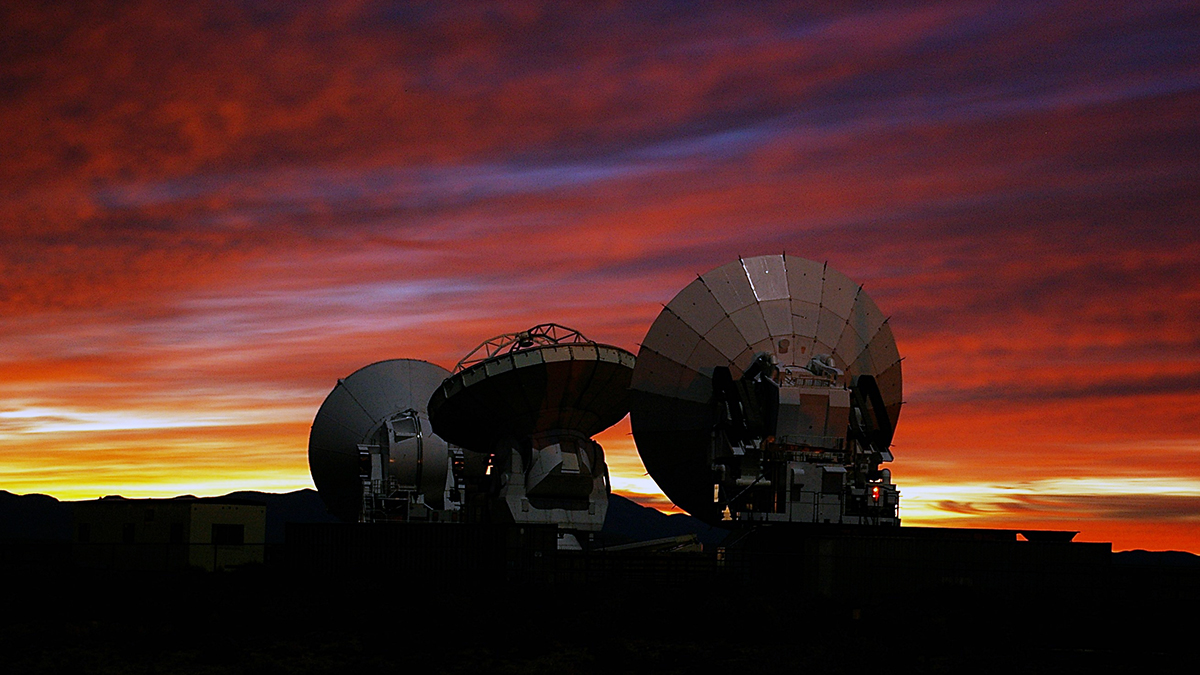 ALMA combines different types of antennas, which have been developed and produced by Europe, North America, and Japan. For observations of the Sun, more than 50 antennas are connected in order to mimic a telescope with a diameter of up to 500m. The number of the involved antennas and the resulting size of this array will be increased in the future. Credits: ALMA (ESO/NAOJ/NRAO)

The primary goal is to advance our understanding of the Sun in comparison to other stars by utilising ALMA's new observational capabilities. For this purpose, ALMA observations are combined with data from other ground-based and space-borne observatories. Numerical simulations are also intensively used for supporting the interpretation of observational data and for the further development of data processing techniques and observing strategies.

From measurement to science-ready data

The observational data for the Sun delivered by ALMA still needs to be processed before the resulting time series of images are ready for a detailed scientific analysis. The complexity and novelty of these observations make the processing a very challenging task. The main focus of the SolarALMA team at RoCS has therefore been the development and optimization of data processing software for ALMA data, resulting in the Solar ALMA Pipeline (SoAP). The processing also includes the co-alignment of ALMA observations with space-borne co-observations with the IRIS and SDO satellites. Many challenges of interferometric imaging of our Sun have been overcome so that the quality of the resulting image series was improved significantly. Regular data processing with SoAP resulted in an increasing number of data sets that is ready for scientific analysis. The long-term aim of RoCS’ ALMA efforts is to provide such processed data sets to the wider solar community.

After the initial development phase of SoAP, an increasing number of scientific results is being published. Data for all available receiver bands (at different wavelengths) is used as the observed continuum radiation is expected to originate from different layers in the solar atmosphere. So far, most studies focused on the dynamics of small-scale brightening events, their interpretation as observable signatures of propagating shock waves, and the oscillatory behaviour of the chromosphere. For the latter, ALMA observations of a large number of different solar regions in Band 3 and Band 6 were compared, finding notable differences between quiet Sun regions and regions with stronger magnetic fields. In addition, the observations provide new constraints for various magnetohydrodynamic wave modes. These results are particularly relevant for studying the impact of different wave phenomena on the atmospheric energy balance of the Sun.

The ALMA team at RoCS continues to contribute to the further development of the solar observing modes as part of the international ALMA solar development group, gradually expanding the offered observing capabilities. As part of the ongoing ALMA Development Study, simulation tools are developed that will allow to quantitatively test, optimise and further develop the data processing pipeline (SoAP) and thus increase the quality and scientific impact of ALMA observations of the Sun. An important requisite for the study was the development of the Advanced Radiative Transfer code (ART), based on an initial version by Jaime de la Cruz Rodriguez (Stockholm University). In the framework of a PRACE Preparatory Access project (2017-18), the performance of ART was increased substantially, making it the future workhorse for producing synthetic observations that are a crucial component of the envisaged processing tests and for comparisons between observations and simulations.

Reaching for the stars

With the start of the EMISSA project in 2019, the ALMA-related activities at RoCS were extended to the study of other stars, providing wider parameter ranges to which the Sun as a reference star can be compared to. The EMISSA project has now compiled an initial of catalogue of stellar observations with ALMA that are complemented with data across a wide wavelength range from the UV to radio. The goal is to characterise the thermal properties of stellar atmospheres and their relation to stellar activity, which promises insights into the activity of our own star, the Sun.

By Sven Wedemeyer
E-mail this page