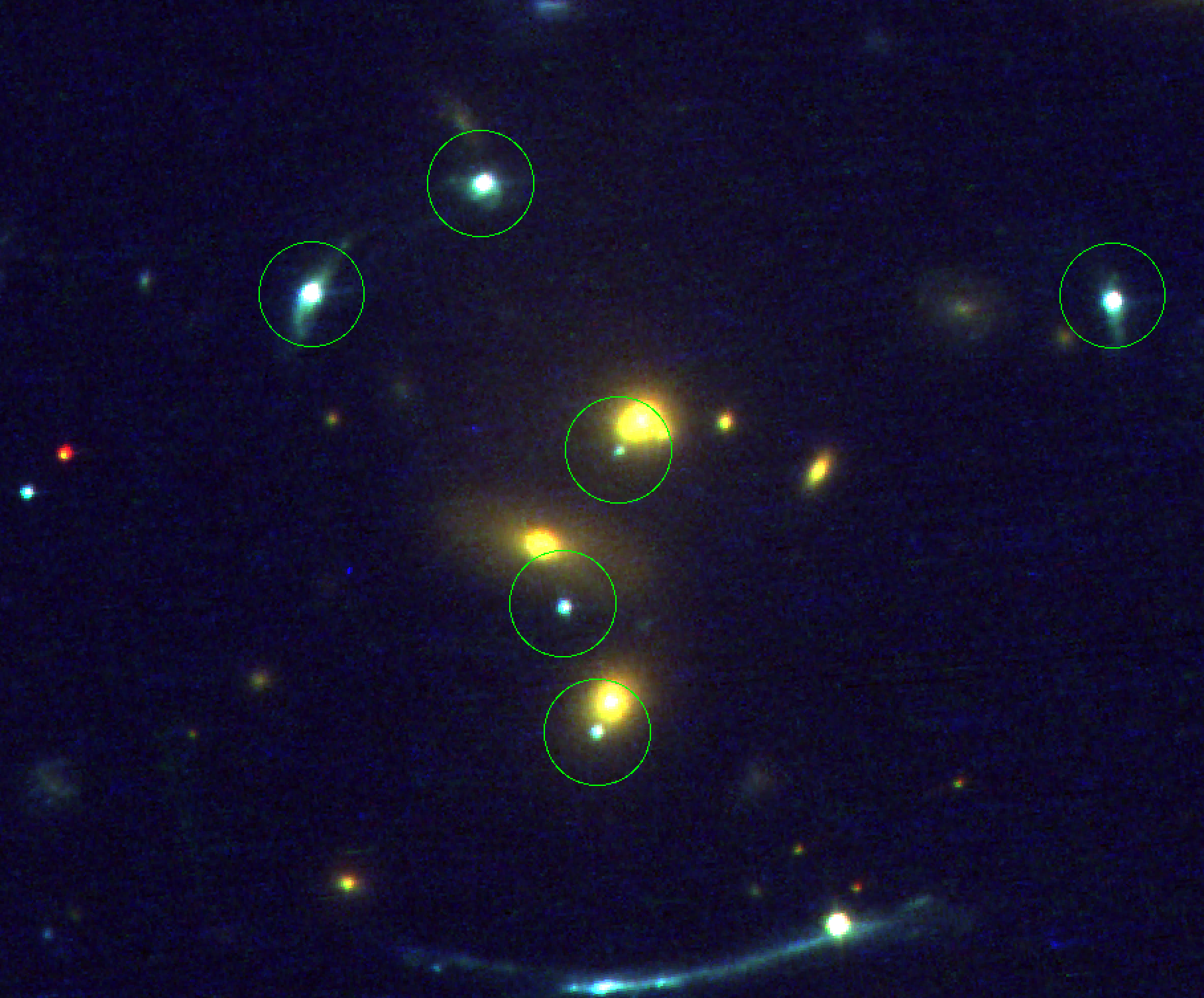 The circles mark the six gravitationally lensed images of the quasar SDSSJ2222+2745. The yellow galaxies belong to the foreground lensing cluster. This project has measured the time delay between the three brightest images. The image was obtained in connection with this project, using the Hubble Space Telescope.

Quasars are among the most energetic phenomena in the universe: Hot gas surrounding a supermassive black hole in the center of a galaxy can emit much more radiation than the rest of the galaxy. If a sufficiently massive object is located along the line of sight to a quasar, the light from the quasar may be deflected in the gravitational field of the foreground object. We may therefore observe multiple images of the same object, a phenomenon known as strong gravitational lensing. Only three such lensing systems are known where the light source is a quasar and the lens is a cluster of galaxies. One of these very rare lens systems was found using NOT. The quasar images have been monitored with NOT at regular intervals since its discovery in 2012, enabling measurements of the time delay between the light variations observed in the three brightest images of the quasar. The variations in quasar image B trail image A by 43 days, while image C precedes image A by 702 days (Dahle et al. 2015). Image C increased its flux by more than 100% in 2014 and 2015, and we are now observing the corresponding flux increases in image A and B during 2016 and 2017. A multi-year monitoring campaign was initiated at NOT in June 2016 to study time variations in the intensity of an emission line in the spectrum of the quasar. These intensity variations will, coupled with the intensity variations monitored by NOT at other wavelengths and time variations in the spectrum of the quasar, monitored at the Gemini telescope, be used to determine the mass of the supermassive black hole in the quasar. This observing campaign, combining NOT and Gemini data, will run until summer 2019.

Hubble Space Telescope observations have been used to identify multiple images of several distant galaxies behind the lensing galaxy cluster. The distance (redshift) to these galaxies were subsequently measured using the Gemini telescope. This information has been used together with the time delays measured using NOT to model the mass distribution of the galaxy cluster which acts as a lens, including the distribution of dark matter. The quasar intensity variations at optical wavelengths measured at NOT during 2015-2016 has been compared to intensity variations in X-rays measured during the same period with the NASA Swift satellite. The optical and X-ray variations of the quasar appear to be uncorrelated.

The Nordic Optical Telescope (NOT) and other ground-based telescopes have been used for imaging of a sample of distant and massive galaxy clusters identified using data from the ESA Planck satellite. One goal is to identify strong gravitational lenses which are particularly well suited to be used as "gravitational telescopes" to magnify images of distant galaxies and study galaxy formation in the early universe. A particularly powerful cluster lens has been discovered using NOT, by detecting a strongly lensed galaxy at exceptionally large angular distance from the lens center. This galaxy has been observed spectroscopically at NOT to measure its redshift and constrain the mass distribution in the galaxy cluster lens.

Another notable result from this work is the discovery of the brightest strongly gravitationally lensed galaxy found so far (Dahle et al. 2016). The ten brightest previously known galaxies at this distance are only 10-30% as bright as this new discovery. The light travel time from this galaxy to Earth is 11 billion years, presenting us with an unprecedented opportunity for a detailed physical study of a galaxy at an epoch when the universe was only 20% of its present age.