Long ago and far away: Viewing galaxy formation and evolution through the best cosmic magnifying glasses

In this project we exploit the magnification effect of gravitational lensing to probe galaxy evolution in unprecedented details. 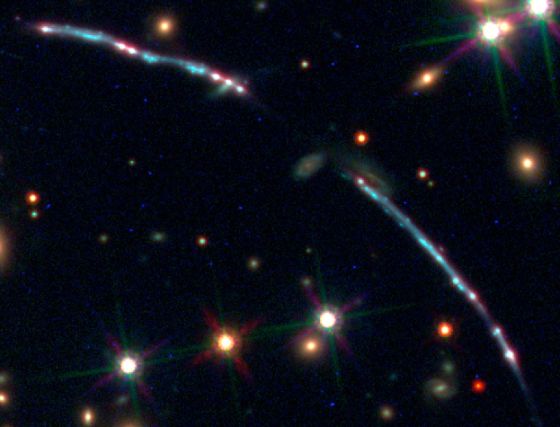 The finite speed of light enables us to look back in time as we peer out in the universe. This enables us to study how galaxies were formed and how they evolved throughout the history of the universe. However, it is difficult to study distant galaxies in detail: Each galaxy only covers a few pixels, even in the best images from the Hubble Space Telescope, and they are so faint that they are only barely detected even with our largest telescopes. Nature has provided us with a tool to overcome these obstacles: Light rays from distant galaxies are deflected in the gravitational field of a massive object, such as a cluster of galaxies, which acts as a lens. This phenomenon is known as gravitational lensing. If the distant galaxy and the lens are almost perfectly aligned along our line of sight, the light will be focused towards us and the distant source will be magnified. This enables us to see objects and study phenomena which would otherwise be unobservable.

By studying a newly discovered galaxy which has been magnified more than 50 times by a gravitational lens, this project will map in detail how stars and galaxies are distributed and reveal how star formation occurred in a galaxy seen when the universe was only 25 percent of its present age.

Finally, the project is using the Nordic Optical Telescope to search for new powerful gravitational lenses among the galaxy clusters recently discovered by the ESA Planck mission.

The primary objective of the proposal is to exploit the magnification effect of gravitational lensing to probe galaxy evolution in unprecedented detail: Specifically, the project seeks to map the gas and stellar mass content and star formation activity in the brightest gravitationally lensed galaxy in the Universe, down to the scales of individual molecular clouds. In addition, the project aims to determine whether supermassive black holes have co-evolved with their host galaxies over the past >11 Gyr.

A secondary objective is making a mass measurement of a supermassive black hole in a distant gravitationally lensed quasar.

Another secondary objective is to conduct a survey of newly discovered galaxy clusters using the Nordic Optical Telescope in order to establish a list of gravitational lenses best suited for future studies of the earliest galaxies using the James Webb Space Telescope.

An analysis of spectroscopic observations obtained during summer 2017 with the Magellan telescope in Chile show that the brightest gravitationally lensed galaxy has properties that have been theoretically predicted, but never previously observed: The observed spectrum shows that emission from the Lyman-alpha line (representing transitions between the ground state and first excited state in the hydrogen atom) is largely escaping unhindered from the brightest portions of the galaxy (Rivera-Thorsen et al. 2017). This also makes escape of even more energetic, ionizing photons highly plausible. Such escape of ionizing radiation has so far only been measured in a handful of galaxies at this distance, none of them as highly magnified as this galaxy. This presents a first opportunity for a detailed study of how the ionizing photons, which reionised the universe 400 million years after the Big bang, escaped from star-forming galaxies in the early universe. During 2018 we have made follow-up observations with the Hubble Space Telescope to directly detect the ionising radiation escaping from this galaxy. The ionising radiation is only seen to escape from a compact, localised region within the galaxy. This region is characterised by a high star formation rate, containing very young stars (with ages less than 3 million years) and low abundances of elements heavier than hydrogen and helium. As a result of the gravitational lensing effect, we are able to see 12 distinct images of the same region. The Hubble Space Telescope data show significant variations in the ration between the measured fluxes at to separate wavelengths (275 nanometers and 814 nanometers). These variations are caused by variations in the absorption by neutral hydrogen gas along spatially separated lines of sight. This has enabled us to demonstrate corresponding variations in the distribution of intergalactic hydrogen gas on spatial scales less than 1 kiloparsec, a hundred times smaller than the smallest scales that have been previously probed this way.

These results have been published in a recent Science paper.

The main international collaborators for the proposed project are as follows:

Dr. M. Gronke (UC Santa Barbara) contributes expertise on interpreting observed spectra of the Ly-α emission line in distant galaxies in terms of their physical conditions and morphology of dust and gas.

Slicing the cool circumgalactic medium along the major-axis of a star-forming galaxy at z = 0.7 (Lopez et al. 2019, Monthly Notices of the Royal Astronomical Society)

The Magellan Evolution of Galaxies Spectroscopic and Ultraviolet Reference Atlas (MegaSaura). I. The Sample and the Spectra (Rigby et al. 2018, Astronomical Journal, 155, 104)

Titan.uio.no: Astronomers observe a sunburst from the early universe - in 12 copies

Presentation from the conference "The Universe as a telescope: Probing the cosmos at all scales with strong lensing", Milan, September 3-7, 2018