Researchers at University of Oslo have discovered a substance which can fight obesity. The pharmaceutical industry is interested and the potential market value is estimated to a billion dollars per year. 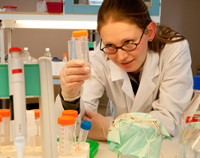 Close to a billion people suffer from obesity in today’s society. Obesity is thus considered to be one of the world’s largest epidemics. Excess fat can lead to insulin resistance which is when the insulin does not function as it should. Insulin is needed to burn sugar and to secure a stable metabolism. When the metabolism stops working, sugar enters the blood. This phenomenon is called type 2 diabetes.

– The problem today is that far too many young people are diagnosed with this disease. Although it is impossible to medicate against lack of physical exercise, one can medicate against excess weight. Correct medication prevents the body from storing fat, says post doctor Eili Tranheim Kase at the School of Pharmacy, University of Oslo.

With financial support from the commercialisation programme FORNY at the Research Council of Norway, Kase has discovered a substance that works in an entirely different way than today’s medicines against obesity.

The discovery has aroused interest from international pharmaceutical companies. Inven2, an innovation company owned by the University of Oslo and the South-Eastern Norway Regional Health Authority, presented their research results at a pharmaceutical conference in Chicago last summer and in Washington this summer.

– The interest in the substance is so great that we expect to land a licensing deal with a pharmaceutical company without having to take detours through investors, says industrial developer at Inven2 Jørund Sollid.

He predicts a significant sales market for the new product.

– The sale potential is huge, we’re looking at an annual billion dollar sum, he says before pointing out that it will take at least seven years to fully develop the product. Before being released to the market, it will, as is the case with all new medicines, go through thorough testing.

The medicine against obesity available today is inefficient and has many side effects. It prevents the intestine’s intake of fat. Usual afflictions are flatulence and frequent oily diarrhoea.

– As obesity is not considered as an illness in itself, the tolerance for side effects is low, says Tranheim Kase.

Other medicines have been withdrawn from the market due to considerable side effects. One medicine triggered a receptor in the brain to alter the feeling of being full. The most common side effects were headaches, perspiration, high blood pressure and rapid pulse.

Not all cells in the body are made for fat storage. The new substance burns fat in the right places.

– Many of the afflicted have fat stored around their intestines and muscles. This is dangerous. Even slim people can have fatty organs. Fat stored in the wrong places may lead to
diabetes.

And this is the main point: the most important way of fighting unhealthy obesity is to prevent fat storage around intestines and muscles.

– We don’t have a sufficient molecular explanation yet, but our experiments show that the substance leads to less fat being stored in both liver and musculature.

The substance affects the regulator in the cell that has to do with metabolism. All body cells contain this regulator.

– The substance takes 24 hours to disintegrate, so one pill a day should be sufficient.

Alteration of one atom

The substance in question is known, but until now, nobody has believed it could be used for anything. It was in fact documented as inactive. Unfortunately the substance is patented and extremely expensive to produce. Today the substance costs 20 million Norwegian kroner a kilo.

Eili Tranheim Kase is therefore searching for a new substance with similar qualities that is cheaper to produce.

– For the pharmaceutical industry to be able to commercialise the substance, we need a patent. This is something we can obtain if we alter one atom in the molecule.

To reach this goal, she uses a three-dimensional computer model of the receptor in the cell, which theoretically tests which substances fit in before laboratory production sets in. Along with her is pharmaceutical chemist Pål Rongved, associate professor at the School of Pharmacy.

– We believe that one of the collateral branches of the molecule is central in the substance we have at hand. Our hope is that the substance has few side effects seeing as it is very similar to the body’s own molecules. This, however, is something we’re not certain about yet and further research is therefore required, says Tranheim Kase.

Tranheim Kase wishes to stress that the new medicine will not be able to serve as a remedy for the excessive eating Christmas parties have a tendency to induce.

–That is unrealistic. The medicine will only help people suffering from obesity to a certain point and no further. A healthy diet and exercise is also important for it to be a success, says Tranheim Kase.

More about the research

New Drugs for Treatment of Obesity