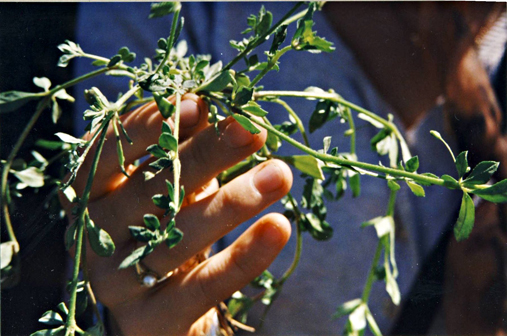 Glinus oppositifolius (L.) Aug. DC. (Aizoaceae) has also been described under the names Mollugo spergula L. or Mollugo oppositifolia L. The plant is a slender spreading or ascending annual herb, and the stems can get 40 cm high. The leaves are opposed two by two, but they seem verticillate by three to five according to the development of axial leaves. The plant grows on damp sandy sites, occurring across West Africa from Senegal to South Nigeria, and is widely distributed in the tropics and sub-tropics generally. In Mali the plant can be found in the Gourma, Dire, Hauossa areas and in the region near Lac Horo. In Mali, aerial parts of G. oppositifolius is used for treating abdominal pain and jaundice. Fresh leaves are reported to be used against dizziness and to stimulate the appetite. The plant has also been reported used against joint pains, inflammation, diarrhoea, intestinal parasite, fever, malaria, furuncles, skin disorders and wounds. G. oppositifolius has previously been shown to possess antimalarial activity by its triterpenoid saponins. A DCM-extract was reported to have fungicidal activity by inhibition against Candida albicans and larvicidal activity against Anopheles gambiae and Culex quinquefasciatus. A molluscicide effect has been obtained by MeOH and DCM extracts on three types of snails, Biomphalaria glabrata, Biomphalaria pfeifferi and Bulinus truncates. Recently, several new saponins have been isolated from the plant.