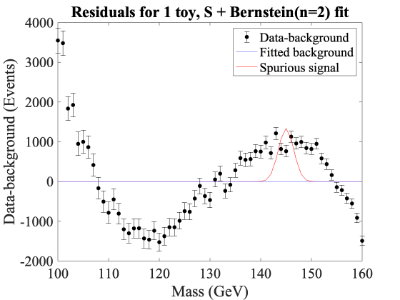 Residuals from a fit of a second-order Bernstien polynomial to Monte Carlo data generated from an exponential distribution. The red curve is the signal component (a Gaussian) of a signal+background fit to the signal-free data. The signal is spurious since there is no such signal in the Monte carlo data.

In the context of a search for new physics in high energy physics, a "spurious signal" is a non-zero signal amplitude obtained when fitting the sum of a background model plus a signal model to data that is known to be signal-free, i.e. a pure background distribution. Although not appearing by name in publications, this concept was developed in the Higgs to diphoton working group of ATLAS in 2011, when the team was worrying about systematic uncertainties in background modeling that could lead to a false claim of observing the Higgs boson. The observation of the Higgs boson was established at the famous seminar at CERN on July 4, 2012, where the ATLAS and CMS collaborations each claimed a 5 standard deviations significant signal in their data consistent with the predicted properties of the Standard Model Higgs boson.

wiktionary says that spurious can mean "False, not authentic, not genuine." or "Extraneous; stray; not relevant or wanted." The combination of all these adjectives is a perfect description of the spurious signal!

By Alex Read
E-mail this page