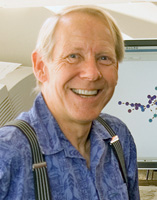 My research focuses on applications of equilibrium and non-equilibrium computational statistical mechanics to a wide range of problems. These include surface structures of porous hydrogels, structure and dynamics of interfaces driven through a medium by an external force, electrochemical adsorption processes, dynamics of magnetization reversal in thin films, network-theoretical analysis of electrical power grids, and topics in evolutionary ecology. Full publication list, going back to 1977.