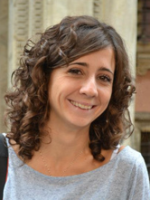 How does a pixel detector speak? And how does radiation affect the performance of silicon

pixel sensors that will be used in the future phases of the Large Hadron Collider (LHC)?

This Ph.D. thesis aims at answering to these two questions.

universe and how they interact. To extend its discovery potential, the LHC keeps increasing

its beams’ energy and intensity. To cope with these new conditions, the LHC experiments

are upgrading their detectors. One of the recent upgrades of the ATLAS experiment is the

Insertable B-Layer (IBL), inserted in May 2014. Built with state-of-the-art technologies, this

interaction region. The IBL sends the collected information as a stream of “words” made of

words”, contain two important pieces of information: the coordinates of the point at which a

particle crossed the detector and the charge collected at this position.

Part of the Ph.D. thesis work was the implementation of an offline software (the byte stream

detector. For example, it is able to convey more information in less words by using

“condensed words”: 4 words contain information on up to 10 pixel hits (the same number of

words in the Pixel format only transmits 4 pixel hits). Adopting this feature has the key

advantage of reducing the “detector readout bandwidth”, the number of words sent by the

detector per unit of time. Its usefulness is undeniable in the context of a large number of

words sent by each detector 40-million times per second, as it is the case of the LHC

experiment. Radiation reduces the amount of collected charge by modifying the silicon

structure and thus altering its electrical properties. Different approaches are under study to

counteract this degradation: for example, different materials (e.g. diamond rather than

silicon) or different geometries can be chosen.

The second part of this Ph.D. thesis work focused on the study of the 3D silicon sensor

technology. Contrary to the standard planar technology, where electrodes are implanted on

the surfaces of the silicon wafer, in the 3D layout the electrodes are columns etched through

the thickness of the device. This geometry presents several advantages: among them, it

allows for shorter inter-electrode distance, which in turn leads to better radiation hardness

(e.g. charge carriers have to travel a short distance and are less likely trapped in the

The 3D sensor production process includes a series of masking, etching and doping

The devices studied in this thesis were produced by SINTEF, a Norwegian research

institute. Preliminary tests showed poor electrical performance in the vast majority of the

sensors. The origin of these shortcoming was unknown, but suspected to be related to a

faulty step in the production process.

As work for this thesis, the sensors were exposed to increasing levels of irradiation and then

level of radiation with respect to sensors with worse electrical characteristics. The

performance could be related to the presence of spurious structures in the silicon, caused by

a too-thin masking, that modify the electric field structure inside the silicon bulk. The same

conclusion was independently reached by researchers at SINTEF. Correcting the

of pixel detectors in the ATLAS experiment.

Laura Franconi is a Ph.D. candidate in Particle Physics at the University of Oslo. She

obtained her Bachelor’s and Master’s degrees at the University of Bologna. Her work