Professor Eric Priest from St Andrews University, Scotland, will give this year's Birkeland lecture at the Norwegian Academy of Science and Letters. The Birkeland Lecture is open for everybody. There is no registration, and the admission is free! 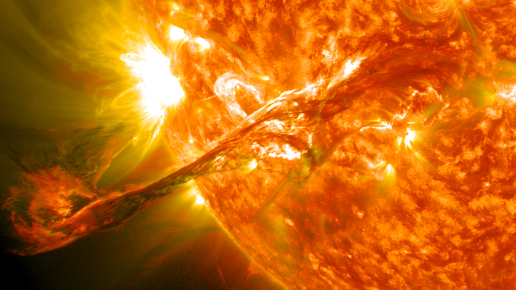 Abstract of the lecture:

This lecture will introduce you to the Sun and its dynamic phenomena, some of which create changes in Near-Earth space whose study was pioneered by Birkeland. The lecture will aim to show how our understanding of many aspects of the Sun has been revolutionized over the past few years by current spacecraft observations and models. It will also describe major puzzles that remain.

The Sun is in the plasma state, the fourth state of matter, which behaves completely differently from the other three states that surround us on Earth (solids, liquids and gases). The main difference lies in the subtle, intimate, nonlinear interaction between the magnetic field and the plasma, described for many purposes by magnetohydrodynamics. Indeed, many dynamic phenomena on the Sun are driven by the magnetic field since, in the outer atmosphere (or corona), it represents by far the largest source of energy.

The interior of the Sun, revealed by solar seismology, possesses a strong shear layer at the base of the convection zone, where sunspot magnetic fields are generated. But a small-scale dynamo is also operating near the surface of the Sun, generating magnetic fields that thread the lowest layer of the solar atmosphere, the photosphere, in a turbulent convective state.

Above the photosphere lies the highly dynamic fine-scale chromosphere and beyond that the rare corona at high temperatures exceeding one million degrees K. Magnetic mechanisms for heating the corona (an intriguing puzzle) will be described. One suggestion involves wave motions and another the formation of intense sheets of current where dissipation of magnetic energy is rapid.

Other puzzles include the structure of giant flux ropes, known as prominences, which have complex fine structure. Occasionally, they erupt and produce huge ejections of mass and magnetic field (coronal mass ejections), which can disrupt the space environment of the Earth.  When such eruptions originate in active regions around sunspots, they are also associated with solar flares, where magnetic energy is converted to kinetic, heat and fast particle energy.

The Birkeland lecture is organized by:

the Norwegian Academy of Science and Letters