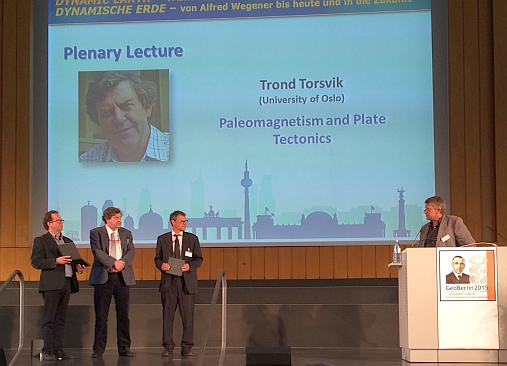 Professor Trond Helge Torsvik, Department of Geosciences and the director of The Centre for Earth Evolution and Dynamics (CEED) knew already that he was awarded the Leopold von Buch Plakette in May this year, but the official awarding ceremony happened recently in Berlin on October 6.

Torsvik is the second Norwegian who receives this award, the other is Olaf Holtedahl/University of Oslo (1885-1975) who received the prize in 1954.

Torsvik get the plakette or medal for his "recognition and appreciation of outstanding professional contribution to Understanding Geodynamics". The award is given by the Deutschen Geologischen Gesellschaft to foreign researchers (outside Germany) for outstanding achievements and research in geoscience disciplines. After the ceremony had Torsvik his plenatary lecture on Paleomagnetism and Plate Tectonics in a packed congress hall.

Christian Christian Leopold von Buch (April 26, 1774 - March 4, 1853) was a German geologist and paleontologist, one of the most important contributors to geology in the first half of the nineteenth century. von Buchs scientific interests were devoted to several geological topics: volcanism, fossils, stratigraphy and more. von Buch traveled in the yeras 1806-1807 throughout Norway and Lapland, and parts of Sweden, in addition had von Buch numerous other scientific expeditions (Wikipedia).