The aim of the ANIMA research project is to evaluate the importance of anisotropic viscosity and olivine texture formation for multi-scale geodynamics processes in the Earth’s mantle. 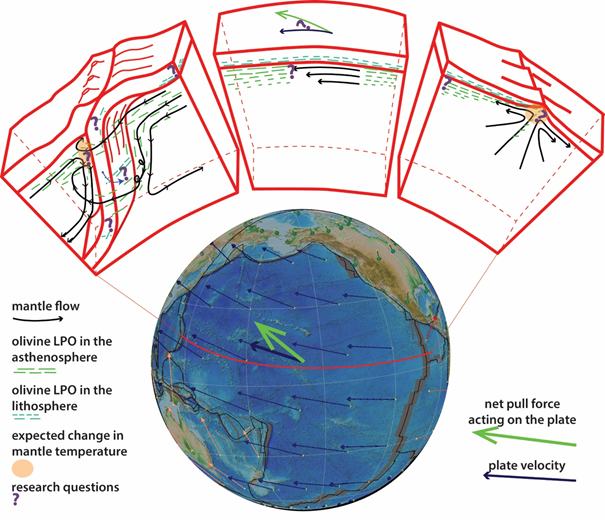 In ANIMA we investigate movements within the Earth’s mantle, which extends to 2900 km depth inside the solid Earth. Beneath the rigid lithospheric plates (~100 km thick), the mantle deforms in a fluid-like (viscous) way under the effects of long-lasting tectonic forces. The rate of deformation is typically very slow (few cm/year) and is determined by the viscosity of the mantle. The viscosity of a material depends on many factors, including temperature, composition, and the forces applied to it. Recent laboratory experiments showed that the viscosity of the mantle also depends on the direction of these forces. We call this behaviour anisotropic (i.e. direction-dependent) viscosity. Because the viscosity of the mantle affects many dynamic processes, from the movement of tectonic plates mountain building, fault formation, and volcanism, it follows that anisotropic viscosity can greatly impact the dynamics of our planet.

To evaluate the role of anisotropic viscosity for geodynamics, we must first understand its origin. Laboratory experiments on mantle minerals (olivine) showed that anisotropy originates from the structure and the alignment of these minerals. Such alignment usually results from deformation in the mantle due to tectonic forces. Hence, we have to study anisotropic viscosity in combination with texture formation (alignment of olivine crystals) in the mantle. In a preliminary study, we found that the two are interlinked.

In ANIMA we will develop a numerical modelling tool that allows us to study the formation of olivine texture in combination with its effect of viscous anisotropy in the mantle. We will use this tool to study the impact of viscosity anisotropy on a variety of geodynamic processes. The results will reform our understanding of the stresses, temperatures, and deformation patterns beneath the ocean basins, and the seismic and volcanic hazards associated with them.

Our primary goal is to evaluate the importance of anisotropic viscosity and olivine texture development for multi-scale geodynamic processes. Secondary objectives are:

Fluid-like movements in the Earth’s mantle largely depend on the rheological behaviour of olivine, the main rock-forming mineral in the upper mantle. The most effective deformation mechanism in the uppermost mantle is dislocation creep, which orients olivine crystals into a direction parallel to the flow, forming a crystallographic preferred orientation (CPO) (Karato and Wu, 1993). We know that olivine CPO is abundant because its presence can be detected using a variety of seismological observations. Indeed, such observations are important indicators of mantle deformation associated with moving lithospheric plates and vigorous flow around subduction zones (Long and Becker, 2010). Importantly, rock mechanics experiments have demonstrated that olivine crystals are also anisotropic in their viscous properties (Durham and Goetze, 1977; Hansen et al., 2016, 2012), and hence when the crystals align with each other the upper mantle's viscosity should be direction-dependent. Anisotropic viscosity (AV) should significantly affect a variety of geodynamic processes by accelerating or slowing their development depending on the CPO in the mantle.

Simplified numerical models showed that the evolution of olivine CPO and anisotropic viscosity are inter-linked (Király et al., 2020). When CPO is well developed we can have fast deformation parallel to its primary orientation, but if stresses are acting perpendicular to it, deformation can significantly slow down. This translate to for example, a large dependency of plate velocity on the CPO and stress orientations in the  asthenosphere underneath the tectonic plates.

The full name of the project is ANIsotropic viscosity in MAntle dynamics, and it is financed as a FRINATEK – Researcher Project for Young Talents by the Research Council of Norway/NFR, with NFR-project number 314742. The project was awarded to Dr. Ágnes Király, CEED/GEO, UiO.

The project is in cooperation with researcers from Norway and the US. The partners are listed below: