UiO The Faculty of Mathematics and Natural Sciences Department of Geosciences
Main navigation
Back to uio.no
Sub navigation Menu
Research > Research projects from A to Z > Climate and landuse change on hydrological response

Global warming arising from the anthropogenic-driven emissions of greenhouse gases and consequent climate change have emerged in the last two decades as one of the most serious environmental issues to ever confront humanity. In this project we study impact of climate and landuse-land cover (LULC) changes on the hydrologic response of a catchment that is representative for one of the Indias's climate vulnerable regions The Beas basin (up to Pandoh dam). 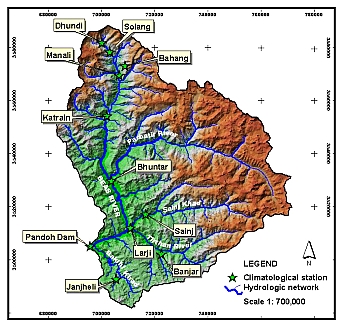 Map: The map show the Beas basin up to the Pandoh dam. Illustration: Project.

The changing pattern of hydro-climatic inputs and catchment response deserves urgent and systematic attention since it will affect water, food and energy security and the occurrence of water related disasters, triggered by extreme events. According to the fourth assessment report of IPCC (2007), future climate change is likely to affect spatio-temporal availability of water, agriculture and increase risk of hunger, energy availability and requirements, as well as more rapid melting of snow and glaciers. A higher or lower rainfall or changes in its distribution would influence the spatial and temporal distribution of runoff, soil moisture, groundwater reserves and would alter the frequency of droughts and floods. In addition, snow- and glacier-fed basins will experience increasing flow rates due to higher melt flow in the initial stages and it may come down as the snow/glacier cover depletes.

In India it is expected that temperatures may increase throughout India and particularly in Northwest and Southeast (see review in Christensen, Hewitson et al., 2007). As a consequence, evapotranspiration may increase. Summer monsoon precipitation may increase throughout, but this would be more marked in the Northeast. No significant increase /some decrease in winter precipitation is likely (Kumar et al. 2010). Rainfall variability may increase and the date of onset of summer monsoon may become more variable. Finally, more extreme rainfall events are likely.

Glacier melt in the Himalayas increase which may lead to more flooding and rock avalanches from destabilised slopes. This will be followed by decreased river flows after two to three decades as the glaciers recede. Freshwater availability in Central, South, East and South-East Asia, particularly in the study region, is projected to decrease due to climate change which, along with population growth and increasing demand arising from higher standards of living, could adversely affect millions of people by the 2050s.

This project aims to study impact of climate and landuse-land cover (LULC) changes on the hydrologic response of a catchment that is representative for the Indias's climate vulnerable regions (Study area: The Beas basin (up to Pandoh dam).  In addition, the impact of such changes on hydropower potential of the catchment will also be assessed.

Project financed jointly by The Research Council of Norway (Project number: 203867) and Department of Science and Technology, Gov. of India.

This project is in cooperation with IITR - Indian Institute of Technology Roorkee.