Through a series of experiments we aim to improve our understanding of the mechanisms and processes that drive and limit benthic foraminiferal dispersal and colonization. 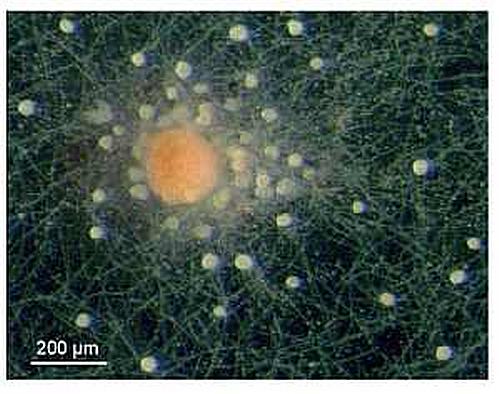 Parent and propagules (numerous small juveniles) of the foraminifer Allogromia sp. on a mat of cyanobacterial fila monts. Enlargement and image by Susan T. Goldstein

Knowledge of the processes and mechanisms that drive dispersal and colonization in benthic organisms is important for understanding the historical development of biogeography and biodiversity patterns. Although dispersal mechanisms in a range of organisms from terrestrial to marine habitats have been considered, benthic foraminifera, which comprise one of the most common, diverse and widespread marine microfossil groups throughout the Phanerozoic, have received little attention.

Our previous experiments (Alve and Goldstein, see publications for references) have suggested passive transport of propagules (tiny juveniles) as an efficient means of dispersal in some shallow-water species.

Recent experiments show that propagules of some species can rest and survive in a cryptic state for two years. Following passive transport, they constitute a substantial bank of individuals in environments beyond the natural distribution of conspecific adults, and may grow in sediments from these environments when exposed to favourable conditions. This realization has prompted us to suggest a novel, propagule based experimental technique.

The research in the Dispersal in Benthic Foraminifera (marine protists) project is carried out in collaboration with Professor Susan T. Goldstein, University of Georgia, USA.