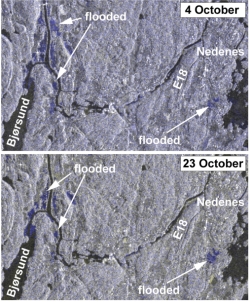 The South of Norway/Sørlandet has been hit several times in the recent past by heavy rain and following flooding affecting people in the communities. However remote sensing using optical images from satellites cannot look through the cloud cover, and thus not help the authorities to find and map flood areas.

But the new EU's satellite program Copernicus and its two advanced radar satellites, Sentinel-1A and Sentinel-1B, can actually look through the cloud cover. And, in addition, the radar images from these satellites are also particularly sensitive to water on the ground surface and can thus indicate flooded areas.

The radar images from Sentinel 1 taken from areas of interest are best compared with radar images taken before or after the flooding event. In this way, flood areas become visible as light blue in the combined pictures and can be mapped.

Sentinel 1 radar images do not have enough resolution to identify small areas under water, for instance between houses, but are particularly useful for mapping larger flood areas.

As areas flooded once tend to become flooded also during future heavy rain phases, the flood maps derived from the Sentinel data can also be useful for further planning of infrastructure, settlements and surface water pathways.