Climatic change is of incredible importance in the polar regions as ice-sheets and glaciers respond strongly to change in average temperature. The analysis of seismic signals emitted by glaciers (icequakes) is thus gaining importance as a tool for monitoring glacier activity. In the SEISMOGLAC project the glacier activity in Svalbard is investigated. 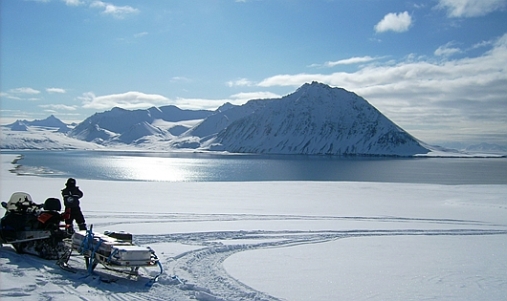 The project team on expedition to Kronebreen in Svalbard in 2013. Photo: Andreas Köhler

Seismology is traditionally concerned with earthquake-related research. However, seismic signals are not only generated in the solid earth, but also by dynamic processes in the cryosphere, where they are often referred to as icequakes. The usage of seismic data has become a powerful method in recent years to complete observations of dynamic processes at glaciers from remote sensing (e.g., satellite images) or glaciological field data.

Improving the understanding of these processes, such as iceberg calving and glacier surging (i.e., a phase of accelerated glacier advance), is mandatory, since the corresponding glacier mass loss in a warming climate is much more dramatic than ice loss from melting alone.

In the SEISMOGLAC research project, we have analyzed icequakes on the Arctic archipelago of Svalbard. Several years of data recorded on permanently installed seismometers have been used to locate regional icequakes in the northwestern, central, and southern part of Spitsbergen, the main island of the archipelago. Autonomous detection methods have been implemented to generate catalogs of icequakes in the different parts of Spitsbergen between 2000 and 2014. 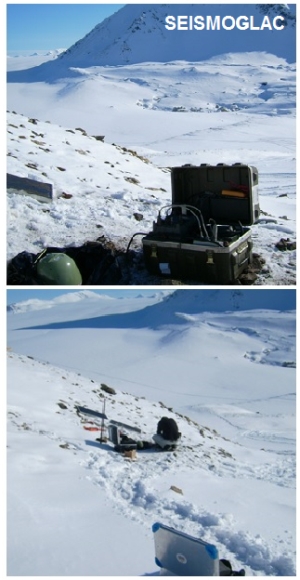 In order to study and better understand the source of regional icequake observations locally, we conducted a field experiment between May and September 2013 close to Ny-Ålesund in northwestern Spitsbergen. A local network of seismometers has been deployed around Kronebreen, one of the fastest flowing glaciers on Svalbard.

Results of the analysis of regional and local icequakes can be summarized as follows:

First regionally observed seismic signals are dominated by a class of icequakes that can be clearly related to individual tidewater glaciers (i.e., marine-terminating glaciers) in different parts of Spitsbergen.

The temporal distribution shows a clear seasonality with strongly increasing number of events in late spring, reaching it's maximum during the end of the summer melt season. These icequake signals have characteristic frequencies, making them easier to distinguish from tectonic earthquakes. This property has been observed previously by other studies for calving-generated signals in Alaska and on Greenland. The Kongsfjord region in northwestern Spitsbergen is one major source for this type of glacier seismicity.

We have obtained more precise icequake localisations in that region in 2013 using the data of the local field experiment. Locations at the termini of glaciers and correlation with directly and visually observed calving at Kronebreen has confirmed that these events are dominantly caused by iceberg calving.

Surging is another important glacier dynamic process on Svalbard. Our findings show indirect evidence for glacier surging through increasing number of calving-related icequakes for example at Tunabreen in 2003, a glacier in central Spitsbergen. Furthermore, another class of icequakes is observed in the area of the Nathorstbreen glacier system in southern Spitsbergen. This glacier system went through a catastrophic surge phase between 2008 and 2013.

In early 2009, a high number of icequakes are observed during the initial surge phase of Zawadskibreen, one of the branches of the system. Observable seismicity is absent during the progression of the surge after May 2009. We have compared our observations with remote sensing data from satellites and found that seismicity is most likely related to faulting during the structural collapse of the glacier.

Our results clearly show the huge potential and importance of seismic glacier monitoring for glaciological research on Svalbard. Using seismic records of the existing, permanent seismometers on Spitsbergen, it is now possible to continuously monitor individual glaciers. Future research will now focus on using seismic calving observations to physically quantify ice loss through calving. Furthermore, it will be easier to detect beginning and ongoing glacier surges on Svalbard.

The project was carried out in cooperation with: