Who can see the snow layer under the forest canopy? A LiDAR system from drones – and maybe also satellites?

Blog post about fieldwork in collaboration with SNOWDEPTH in the forests around Sodankylä (Finland), published via the Swiss WSL Institute for Snw and Avalance Research SLF – slf.ch 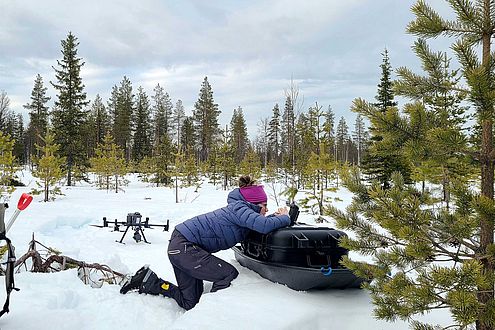 Measuring snow in forested areas is tricky. Optical cameras don't see through the dense canopy – and may not even detect whether there is any snow on the ground or not. LiDAR systems are the go-to system for snow depth mapping in forests, as they capture both the canopy and the snow surface underneath. Traditionally, the LiDAR system is mounted on an airplane or drone – but maybe the data from the novel ICESat-2 laser satellite is just as good? This is one of the questions the SNOWDEPTH project at the Department of Geosciences at the University of Oslo is working on. To answer this question, Clare Webster (UiO/SLF) and Cassie Lumbrazo (University of Washington/UiO) used drones to map the snow-covered forests around Sodankylä in the same areas where we also have ICESat-2 data.

Read the article (in English):