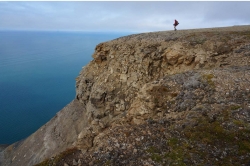 This year’s field-campaign in the Trias North project aimed to collect both regional-scale Triassic sedimentary data to provide a comprehensible paleogeographic understanding of the areas development, but also to understand in full detail the structural and sedimentological development of the growth-faults exposed at Kvalpynten.

On Edgeøya the tasks were plenty and the team often split into five different groups that went separate ways.

Detailed GPS data, photometric collection, sandstone sampling, sedimentological logging, facies observations and fault and structure analysis were carried out. Chilly winds and low clouds were not much of a hindrance, but a lazy polar-bear guarded the northern access to a beach-section for two whole days, preventing the eager American team from getting a better a look at shale detachments. VHF radios were kept warm as the "Geological Field Party" and "Black Zodiac" communicated with boats offshore about the bear’s location. ‘It is just beneath the dolerite sill intrusion’ was apparently not informative enough!

Edgeøya exposes brilliant Mesozoic outcrops: 300–350 meter cliffs, free from vegetation and largely free of scree with near-vertical faces revealing intricate sedimentological features. The only problem with such brilliant cliffs, is that they are in fact just that, cliffs. Our hardy team scrambled up steep rock avalanches, edged our way up winding incised valleys, clambered up icy snow-chutes and even undertook long treks to attempt to reach the outcrops from above. A snow-chute which was impossible to climb just two years ago had stabilized, and the team could collect its longest log to date, almost 200 m.

The team spent four days at Kvalpynten, two at Svartpynten and a day each at Wilhelmøya and Skrukkefjellet. New locations provided new outcrops, new challenges and a closer look at some very old reptilian bones!

With a gale-force wind in our back the research vessel MS Ulla Rinman was carried back to Longyearbyen many hours earlier than expected. A tired but happy crew came ashore, weighted down with well-filled note-books and a large quantity of rock-samples. As the fall season descends and geologists reluctantly return to their offices, the time for analysis and collation of data begins. What exciting results can we expect from this summer’s expedition?

This article was also published in the Trias Norh newsletter no 1/2014.