UiO The Faculty of Mathematics and Natural Sciences Department of Geosciences
Main navigation
Back to uio.no
Sub navigation Menu
Research > Research projects from A to Z > WATCH

Water and Global Change (WATCH) is an Integrated Project (under the EU FP6) to evaluate the global water cycle’s response to current and future drivers of climate change.

UiO researchers primarily contribute to Work Block 4 (WB4) “Hydrological Extremes” through the assessment of the spatial and temporal characteristics of drought and large-scale flood under current and future climate. At the regional scale, the European Water Archive (EWA) with observed daily river flow from more than 600 stations, has been used to investigate i) changes and trends in mean monthly and low flows across Europe, ii) spatial patterns of inter-annual variability of high and low flows and iii) how well spatial and temporal drought patterns are simulated by a Regional Climate Model (RCM). Recently, a multi-model analysis of droughts has been initiated to evaluate the ability of large-scale models (Land-surface hydrological models and Global Hydrological models) to simulate hydrological extremes (using the same WATCH forcing data). 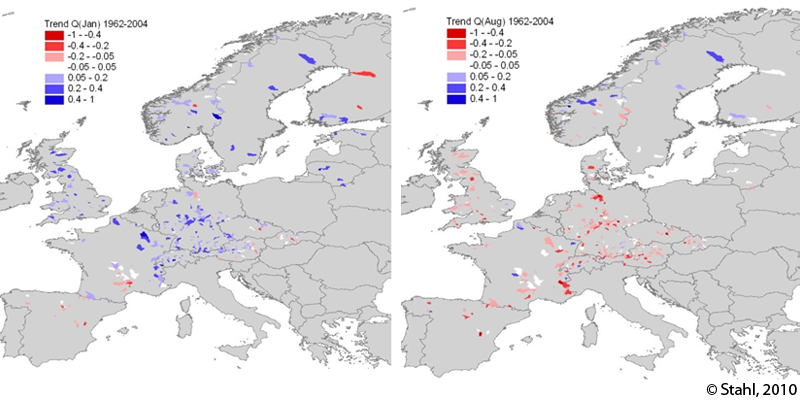 Trends in mean monthly streamflow for January (left) and August (right) for 1962-2004. The trends are given in standard deviations per year with blue (red) indicating trends towards wetter (drier) conditions.

The Global Water Cycle is an integral part of the Earth System. It plays a central role in global atmospheric circulations, controlling the global energy cycle (through latent heat) as well as the carbon, nutrient and sediment cycles. Globally, the supply of fresh water far exceeds human requirements. However, by the end of the 21st century, these requirements begin to approach the total available water. Of course, regionally, the water demand – for agriculture, and domestic and industrial use – already exceeds supply (more).

The work is divided into seven WorkBlocks (WBs), focusing on:

For more information about the project see EU-WATCH website.