DOMT is a 4 year research program on optical measurement techniques such as Particle Image Velocimetry and Synthetic Schlieren (aka Background Oriented Schlieren). The project was awarded by the Norwegian Research Council on Dec 19, 2013 and will start up in Q1 2014. 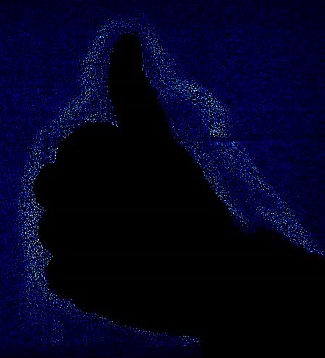 Synthetic Schlieren image of heat rising from a hand.

The measurement technique known as Schlieren is normally attributed to Focault (1859) and Toepler (1864) depending on national preference. It was initially used by Focault to measure and visualize the quality of optical lenses. The technique is based on imaging an experimental setup and placing a knife edge at the focal point of the imaging system so as to mask out half the light. Light rays that are refracted onto the blade will give rise to dark spots in the imaging system, whereas light refracted away from the edge will give rise to brighter spots. Hence, the direction (sign) of the density gradient is known. In the more than 150 years that have passed since its invention, numerous investigators have worked on expanding and improving the Schlieren technique. The developments in digital camera technology during the 1990’s provided cheap, affordable imaging technology which led to the introduction of the digital version of Schlieren, here referred to as Synthetic Schlieren (SS, see Dalziel et al., 1998, Sutherland et al., 1999, Dalziel et al., 2000), but also widely known as Background Oriented Schlieren (BOS, see Meier, 1999). These, essentially identical techniques are based on imaging a known background pattern located behind an experimental setup. Changes in the refractive index gradient in the setup will give rise to an apparent motion of the background pattern. One may therefore readily apply pattern matching principles from a method known as Particle Image Velocimetry (PIV) to calculate this apparent motion, which is subsequently used to calculate the change in refractive index and thereafter the change in density gradient.

The DOMT project will employ a PhD and a Post Doctoral researcher to work with two novel ideas for improvements of Synthetic Schlieren and the underlying pattern matching algorithm which also happens to be the same as the one used in PIV.

The DOMT project is financed by the Norwegian Research Council under the FRIPRO program.

DigiFlow is a software suite for Particle Image Velocimetry, Particle Tracking Velocimetry and Synthetic Schlieren and it is written by Dr Stuart Dalziel of Cambridge University.