Mechanics is the branch of science concerned with classical forces and the effect forces exert on (solid or fluid) physical bodies.

Theoretical and applied fluid mechanics relate to a large variety of topics such as: flow processes in the subsea and offshore industry, blood flows in thin canals and tissue, strong wave impact on wind turbines in the offshore environment, and on ship and offshore platforms, prediction and warning of long tsunamis caused by landslides, submarine slides and seismic motion, extreme ocean waves and invisible underwater interal waves in the ocean, oil- and gas transport in long pipelines and others.

Solid mechanics may be defined as the study of the principles, and the associated mathematics, that describe the behaviour of solid materials and objects when they are subjected to external actions such as forces, temperature changes and applied displacements. The term is sometimes used in a narrow sense to include only solid materials and deformable bodies. However, in our group we adopt a wider definition that includes structural elements and entire structures (such as bridges, ship hulls and offshore platforms, etc.), the study of which is often referred to as structural mechanics. 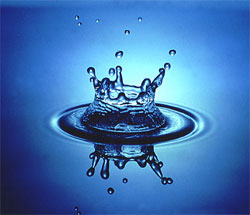 Nonlinear water waves with effects of surface tension and turbulence are studied by the international research community, also studied in this research group.

In the research group, we are working with mathematical theories, experimental measurements using laser methods in the Hydrodynamics Laboratory, numerical methods and computations of such waves, flows and their impact. We work with model equations from theoretical physics, like variants of the KdV- and Schrödinger equations, other partial differential equations, integral equations and Green functions. We work with finite element methods (FEniCS) and computational methods in fluid mechanics with simulations of single- and multiphase flows including the motion of free boundaries like surfaces and internal waves.  We work with turbulence modelling (Large Eddy Simulations) and through the 4DSpace project we are now even investigating turbulence in space.

Our research is to a large extent financed by the Norwegian Research Council. We have several ongoing and previous projects that can be found under the list of Project on  the right hand menu. Furthermore, we have projects sponsored by industry

and we have previously taken part in strategic programs like

NFR 146526/420 Strategic University Program 'Modelling of currents and waves for sea structures' at the Univ. of Oslo, Univ. of Bergen and NTNU. Prosjektleder: J. Grue.

Some selected previous projects sponsored by the Norwegian Research Council are

Young scientists competition on Marine Renewable Energy, Blue energi, is developed by the reserach group in collaboration with The Research Council of Norway/Proscientia which also arranges the competition: