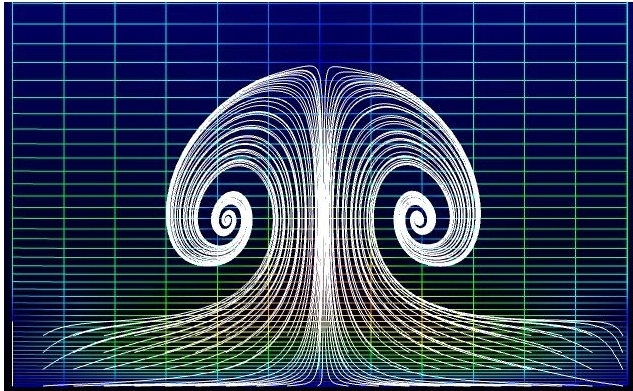 We have in mind, particularly, strong wave and current forces on fixed or floating offshore wind turbines. Plans for offshore wind turbines include support by vertical columns that are about 5 m in diameter, and may be fixed if the water is relatively shallow, or moored if the water is deep. A concern is high-harmonic wave and current forces that may cause vibrations of the structure's eigenperiods. An estimate of the lowest eigen mode is in the range 1-2 seconds, depending on the size of the turbine. Besides this, the problem focus is rather general and will benefit hydrodynamic research and engineering applications in a broader sense. The proposal combines theory development, computing and experimental measurements -- in the latter we plan to use force gauges and Particle Image Velocimetry. The overall focus of the proposal is divided into three sub-focuses, that all are linked together theoretically, computationally and experimentally: 1) Shallow water kinematics 2) High-order loads on a slender vertical cylinder 3) Wave-current forces on a vertical cylinder

An exhaustive and in-depth investigation, through collaboration with internationally leading experts, is undertaken to estimate the forces due to waves and currents that can act on a vertical cylinder in the sea environment, where we have in mind, particularly, the wave and current forces on piles supporting wind turbines in the marine environment. This includes a careful evaluation of the realistic sea conditions.
- through measurements and nonlinear simulations, evaluate realistically the kinematics of waves in shallow and intermediate water depth
- perform a new set of experiments measuring the wave loads on a vertical cylinder, exposed to strong waves in shallow and intermediate water depth as input, and use exising codes and develop new codes that can mimic the measured forces
- analyse wave-current forces by wave-tank measurements where a vertical cylinder is towed forward with speed, corresponding to a realistic current in the ocean, and develop new, nonlinear theories and codes for nonlinear wave-current interaction with a vertical cylinder

We are motivated by, particularly, industrial needs for improved and cost-efficient design of offshore wind turbines. These are supported by relatively slender vertical columns, which may be fixed if the water is relatively shallow, or moored if the water is deep. An exhaustive, in-depth and an internationally collaborative effort is undertaken, investigating the forces due to waves and currents that may act on a vertical cylinder in the sea environment. Experiments, development of new theories and computation tools are combined in an analysis of kinematics of strong waves in shallow water and water of intermediate depth. Velocity fields of strong waves below and beyond breaking are measured in precise laboratory tank facility using high-speed Particle Image Velocimetry and compared to nonlinear computations. The estimated waves are used as input conditions to physical force measurements and calculations of the loads, the latter using various nonlinear potential formulation codes as well as Navier Stokes solvers and Large Eddy Simulation computational tools, where the motion of the free surface is accounted for by a Volum of Fluid computational strategy. Of particular interest is the high-harmonic forces that occur in very strong waves. Also the combined effect of waves and currents interacting with a vertical cylinder is investigated in the laboratory, by towing the cylinder in the incoming waves, developing in parallel a novel wave-current-body analysis to cubic order in nonlinearity. An ultimate goal of the project is to perform several experimental runs in the physical laboratory with complementary computations using different methods and codes, providing a base of results of higher-harmonic loads on a vertical cylinder in any thinkable wave-current condition at sea.