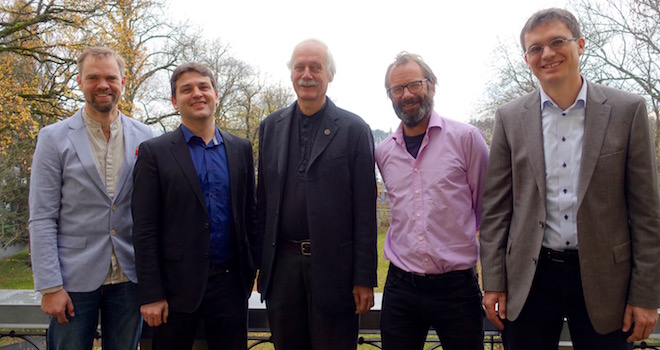 We have a centre!

"Yesterday we didn't have a centre, today we do", director Mats Carlsson told invited guests at the official opening seminar of the new Rosseland Centre for Solar Physics, held at the Norwegian Academy of Science and Letters on November 1, 2017. The statement was greeted with chuckles from the audience, as the solar physics group at the Institute of Theoretical Astrophysics already has a long history of doing world class solar research.

However, Carlsson stressed that the flexibility involved in the funding provided for the new centre allows for new and exciting possibilities. Among other things, there are concrete plans for a visitor programme involving two positions at the centre.

The Norwegian Centres of Excellence (SFF) programme gives Norway’s best scientists the opportunity to organize their research in specialised centres in order to reach ambitious scientific goals. The centres are funded by the Research Council of Norway with close to 17 million NOK per year over a period of 10 years.

The goal of the new Rosseland Centre for Solar Physics is to understand the workings of our nearest star, the Sun. By combining observations of the Sun with advanced computer models, the researchers at the centre will develop new knowledge about particle acceleration and heating, both inside and around the Sun.

The first application for the Rosseland Centre for Solar Physics was submitted to the Norwegian Research Council almost exactly two years ago, in November 2015. Originally, there were 150 applicants, and through a long and thorough process these were narrowed down to 10 centres that were given funding.

Mats Carlsson himself was in the US when the good news arrived in March this year.

– The centres were announced in the middle of the night in Norway, Carlsson says. – But since I was in the states, it was daytime for me, so I didn't have to stay awake to find out if we had made it.

The Rosseland Centre for Solar Physics will consist of the entire solar research group at the Institute of Theoretical Astrophysics. Mats Carlsson will be director of the centre, and Viggo Hansteen, Boris Gudiksen, Luc Rouppe van der Voort and Sven Wedemeyer are principle investigators (PI).

Press release from the Research Council of Norway