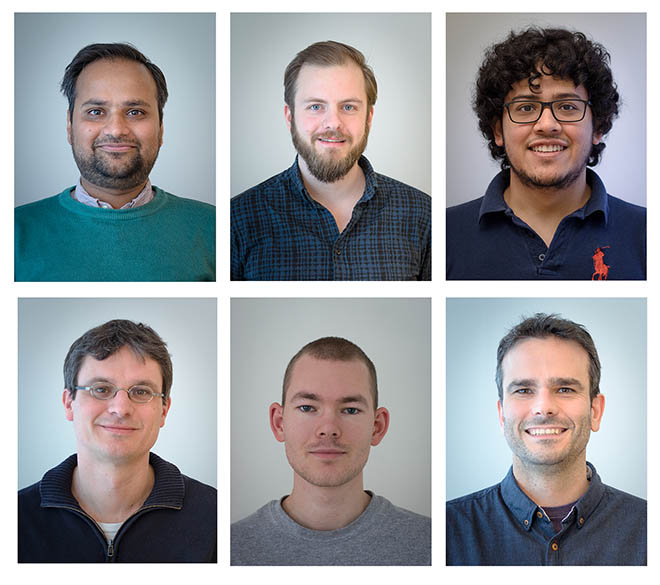 Journal: Philosophical transactions A of the royal society

We use sophisticated 3D numerical models of the solar atmosphere from Bifrost. We study

the radiation in mm-wavelenghs such as sampled with ALMA, which is strongly connected with the highly dynamical structures of the chromosphere.

2. "Umbral chromospheric fine structure and umbral flashes modelled as one: The corrugated umbra"

The umbra of sunspots, the most recognizable manifestation of magnetism in the Sun,

breathes and pulsates with oscillations that brighten its dark upper layers every three minutes, revealing a wide variety of very fine and dynamic dark structures. At the same time very small brightenings are observed that were previously interpreted as jets secondary to magnetic reconnection.

RoCS scientists, for the first time, were able to produce models that reproduce observations of the umbra of sunspots at the locations of the fine structure while at the same time, and again as a first, capturing the complete flow structure of the broader oscillation.

These models and complementary analysis firmly set the intricate fine-structuring of the umbra of sunspots as corrugations in the broader remarkable oscillation pattern.The appearance is that of a playing drum covered with grains of sand, where the grains glow when falling back down to the tune of the music.

3."Signatures of ubiquitous magnetic reconnection in the lower solar atmosphere"

Journal: Astronomy & Astrophysics (A&A) - the publication is marked as an A&A highlight

Magnetic reconnection is a fundamental physical process that governs a variety of high energy dynamics in the solar atmosphere, such as flares and coronal mass ejections. In the lower solar atmosphere, small-scale magnetic reconnection manifests as intense and compact brightenings in the wings of the hydrogen Balmer-a line known as Ellerman bombs. Ellerman bombs are constituents of magnetically active solar regions and magnetic flux emerging regions.

It will be of great interest to study the role of this ubiquitous small-scale magnetic reconnection phenomenon in chromospheric and coronal heating.

4."High-resolution observations of the solar photosphere, chromosphere, and transition region. A database of coordinated IRIS and SST observations"

Since the launch of NASA’s Interface Region Imaging Spectrograph (IRIS) in 2013, we have conducted coordinated observing programs with the Swedish 1-m Solar Telescope (SST) on La Palma.

The combined IRIS+SST observations provide extensive coverage of the solar atmosphere from the photosphere to the chromosphere and transition region.

In this paper, we describe a public database of coordinated IRIS+SST datasets that are open to the solar physics community for scientific analysis.

Journal: Philosophical Transactions A of the Royal Society

Observations of a magnetic enhanced region in the Sun with the Atacama Large Millimeter/submillimeter Array (ALMA), around 100 GHz, have been used to trace in time and space small structures which, due to their oscillatory nature, might be associated with oscillation modes of the plasma, particularly fast-sausage and kink modes.

The importance of this study lies in the fact that ALMA frequencies are formed in the solar chromosphere, and can be directly associated with local temperature of the gas, something that is been taken advantage of only lately because radio telescopes in the past did not have such temporal and spatial resolution as ALMA does.

5."Accelerated particle beams in a 3D simulation of the quiet Sun"

Signs of strongly accelerated particles are observed in flaring events of all sizes on the Sun.

Simulations exploring the effects of these particles are becoming increasingly sophisticated, but have so far mainly involved simple 1D models of the solar atmosphere.

We have, for the first time, incorporated a particle acceleration and transport model into a realistic 3D atmospheric simulation framework.

Our simulations of the quiet Sun showed that particle acceleration arises throughout the solar corona, resulting in a large number of particle beams that converge with depth in the chromosphere. The beams that converge at the same location sometimes come from completely separate acceleration regions, an effect that could show up in observations as a mix of signatures from different electron populations.