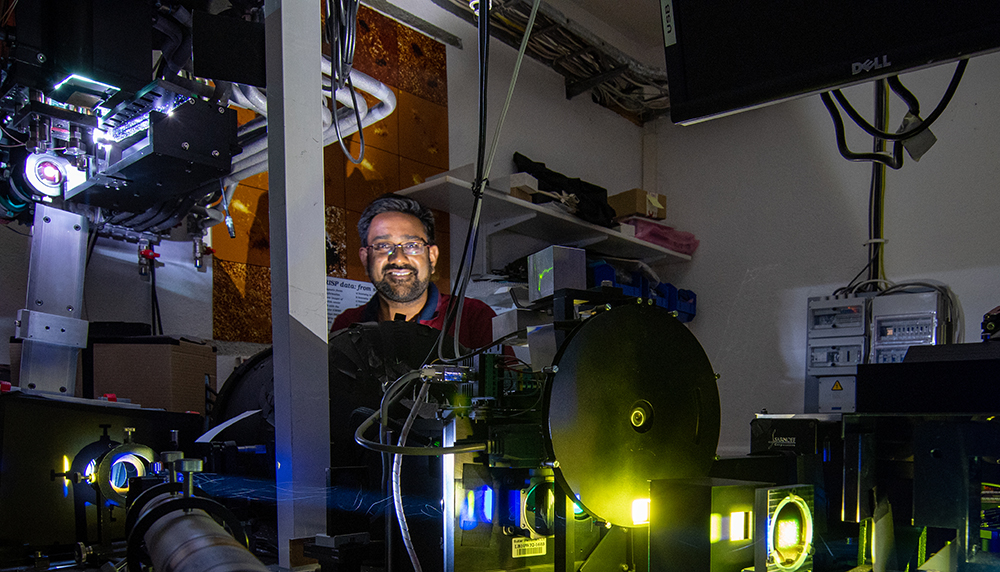 Souvik Bose inside the optics room of the Swedish 1-m Solar Telescope (SST) on La Palma, Canary Islands, Spain. The “white” light from the Sun is spit into blue and the yellow beams (seen above) that are subsequently analyzed by two different instruments named CHROMIS and CRISP“. Photo: Daniel Nóbrega Siverio

Spectroscopic observations of the emission lines formed in the transition region (TR) commonly show persistent downflows of the order of 10--15 kms−1. Their cause, however, is still not fully clear and has remained a matter of debate. Using two sets of coordinated data from SST, IRIS, and SDO, we aim to understand the cause of such downflows by studying the coronal and TR responses to the recently reported chromospheric downflowing rapid red-shifted excursions (RREs), and their impact on solar atmospheric heating. To provide theoretical support, we use an already existing 2.5D magnetohydrodynamic simulation of spicules performed with the Bifrost code.

We show several examples of the spatio-temporal evolution of downflowing RREs across multiple channels, ranging from the cooler chromosphere to the hotter corona. Our analysis suggests that they are likely the returning components of the previously heated spicular plasma. Furthermore, the TR Doppler shifts associated with them are close to the average redshifts observed in this region, which implies that they could (partly) be responsible for the persistent downflows observed in the TR. We also propose two mechanisms (an upflow followed by a downflow and downflows along a loop), from the numerical simulation, that could explain the ubiquity of such downflows. A detailed comparison between the synthetic and observed spectra, reveals a distinctive match, and further suggests an impact on the heating of the solar atmosphere. We present compelling evidence that suggests that many of the downflowing RREs are the chromospheric counterparts of the TR and lower coronal downflows.

Surges are cool and dense ejections typically observed in chromospheric lines and closely related to other solar phenomena like UV bursts or coronal jets. Even though surges have been observed for decades now, questions regarding their fundamental physical properties such as temperature and density, as well as their impact on upper layers of the solar atmosphere remain open. Our purpose is to address the current lack of inverted models and diagnostics of surges, as well as characterizing the chromospheric and transition region plasma of these phenomena. We have analyzed an episode of recurrent surges that appear related to UV bursts observed with the  Interface Region Imaging Spectrograph (IRIS) on 2016 April. The mid- and low-chromosphere of the surges are unprecedentedly examined by getting their representative Mg II h&k line profiles through the k-means algorithm and performing inversions on them using the state-of-the-art STiC code. We have studied the far-UV spectra focusing on the O IV 1399.8 Å and 1401.2 Å lines, unexplored for surges, carrying out density diagnostics to determine the transition region properties of these ejections. We have also used numerical experiments performed with the Bifrost code for comparisons. Thanks to the k-means clustering, we reduce the number of Mg II h&k profiles to invert by a factor 43.2. The inversions of the representative profiles show that the mid- and low-chromosphere of the surges are characterized, with a high degree of reliability, by temperatures mainly around T=6 kK at −6.0≤log10(τ)≤−3.2. For the electronic number density, ne, and line-of-sight velocity, VLOS, the most reliable results from the inversions are within −6.0≤log10(τ)≤−4.8, with ne ranging from 1.6x1011 cm-3 up to 1012 cm-3, and VLOS of a few km s-1. We find, for the first time, observational evidence of enhanced O IV emission within the surges, indicating that these phenomena have a considerable impact on the transition region even in the weakest far-UV lines. The O IV emitting layers of the surges have an electron number density ranging from 2.5x1010 cm-3 to 1012 cm-3. The numerical simulations provide theoretical support in terms of the topology and of the location of the O IV emission within the surges.