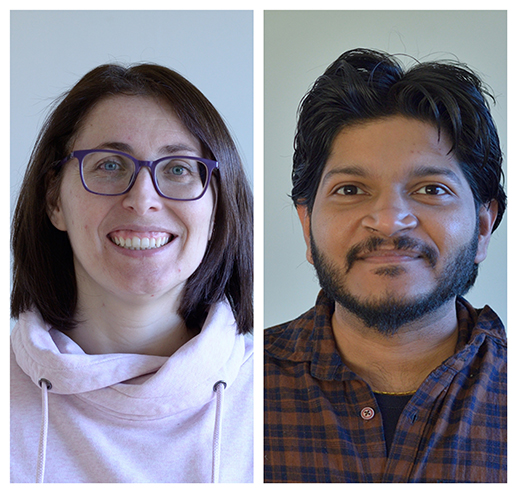 One important feature of sunspots is the presence of light bridges. These structures are elongated and bright (as compared to the umbra) features that seem to be related to the formation and evolution of sunspots. In this work, we studied the long-term evolution and the stratification of different atmospheric parameters of three light bridges formed in the same host sunspot by different mechanisms. To accomplish this, we used data taken with the GREGOR Infrared Spectrograph installed at the GREGOR telescope. These data were inverted to infer the physical parameters of the atmosphere where the observed spectral profiles were formed of the three light bridges. We find that, in general, the behaviour of the three light bridges is typical of this kind of structure with the magnetic field strength, inclination, and temperature values between the values at the umbra and the penumbra. We also find that they are of a significantly non-magnetic character (particularly at the axis of the light bridges) as it is deduced from the filling factor. In addition, within the common behaviour of the physical properties of light bridges, we observe that each one exhibits a particular behaviour. Another interesting result is that the light bridge cools down, the magnetic field decreases, and the magnetic field lines get more inclined higher in the atmosphere. Finally, we studied the magnetic and non-magnetic line-of-sight velocities of the light bridges. The former shows that the magnetic component is at rest and, interestingly, its variation with optical depth shows a bi-modal behaviour. For the line-of-sight velocity of the non-magnetic component, we see that the core of the light bridge is at rest or with shallow upflows and clear downflows sinking through the edges.

Noise storms are the earliest known solar radio burst sources. But the driver of these are still not well understood. Usually found associated with localised centres of magnetic activity on the Sun, they are produced by accelerated high energy particle jets. Owing to rapid flux variability of these sources in frequency and time axes, high contrast high speed imaging across a range of frequencies in a broad spectrum was needed to study these sources well. MWA made this possible with its ability of generate high contrast images at sub-second and sub-MHz time-frequency averaging.

Using such images, this work explored the spectro-temporal evolution of the intensity and shape of a noise storm source associated with a weak solar flare (microflare). These events are one of the most ubiquitous of coronal heating events. The radio source was associated with a network of braided magnetic structures connected to the flaring region. It was visible before, during and after the flare and showed very complex dynamical features previously unknown. This work could disentangle this complex dynamics to discover independent modes of structural evolution in these sources. These evolutionary modes could be linked to the evolution of the local magnetic field structures for the first time. This lead to a new understanding on how the stored energy in complex magnetic field networks are released into heating the corona and accelrating local plasma.