The flyby on 27 November went well and placed Solar Orbiter onto the correct orbit for its science phase to begin. RoCS - Rosseland Centre for Solar Physics, UiO, takes part in the mission. 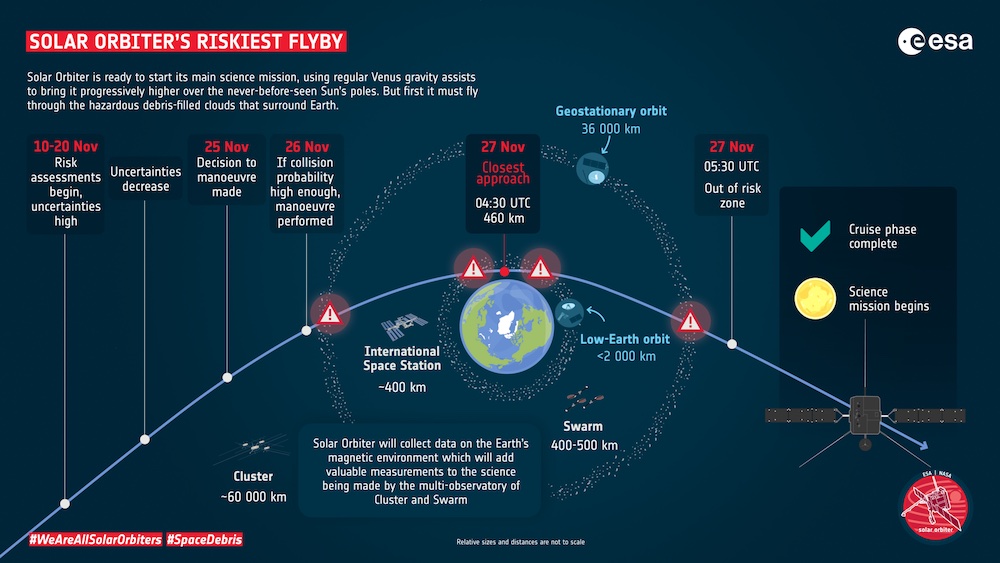 Solar Orbiter, launched in February 2021, swung by home to ‘drop off’ some extra energy. This will line the spacecraft up for its next six flybys of Venus. These final gravity assists will hone and tilt Solar Orbiter’s orbit, enabling the heat-protected probe to capture the first-ever direct images of our star’s poles, and much more. Image: European Space Agency

RoCS is responsible for the computer programs that convert the raw binary data from the remote-sensing instrument SPICE to a format that can be analysed by scientists.

The risks of a flyby

At closest the spacecraft was around 460 km above our planet and in the Low Earth Orbit zone. This is where the International Space Station and many other spacecrafts can be found. It is also home to a lot of space debris, meaning that there was a small risk of a collision between Solar Orbiter and space junk.

Solar Orbiter is now on its way to its first close solar encounter around 26 March 2022.

To reach this region, Solar Orbiter will also have to fly through another well-used orbital region, called Geostationary orbit, which again is congested with space debris and other satellites. ESA will monitor the situation carefully and change the trajectory of the spacecraft if it needs to.

Solar Orbiter is the most complex scientific laboratory ever to have been sent to the Sun. Although our life-giving star has been an object of scientific interest for centuries, its behaviour still presents a puzzle for scientists. Solar Orbiter will take images of the Sun from closer than any spacecraft before and for the first time look at its uncharted polar regions. By combining observations from Solar Orbiter’s six remote-sensing instruments and four sets of in situ instruments, scientists hope to find answers to some profound questions: What drives the Sun’s 11-year cycle of rising and subsiding magnetic activity? What heats up the upper layer of its atmosphere, the corona, to millions of degrees Celsius? What drives the generation of the solar wind? What accelerates the solar wind to speeds of hundreds of kilometres per second? And how does it all affect our planet?

Solar Orbiter is a satellite mission of European Space Agency. It is is part of the ESA's Science Program Cosmic Vision 2015-2025.