Listening to the symphony of sunspots

- We have found the largest resonant oscillations detected in an intense sunspot, says Dr. Shahin Jafarzadeh, guest researcher at RoCS and part of the WaLSA international team behind the research. The results were published 25th of January in Nature Communications. 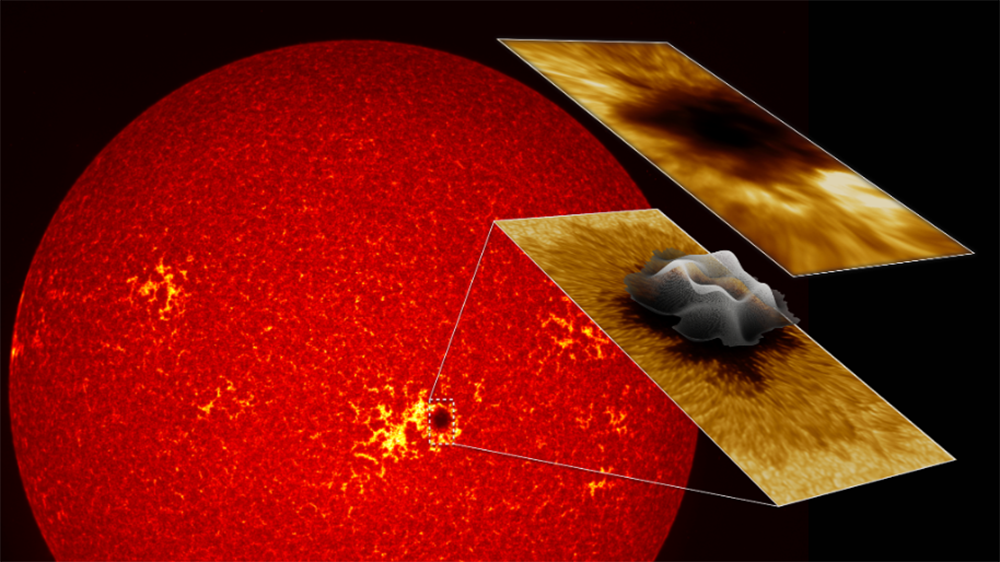 It is the first time that a coherent oscillation over spatial scales as large as 40 Mm, more than 3 times the Earth’s diameter, have been found in a sunspot. Illustration credit: Credit: NASA/SDO and Dunn Solar Telescope.

The results in the publication Large scale coherent magnetohydrodynamic oscillations in a sunspot (open access) have been obtained by a team of 14 researchers, spanning 6 countries and 12 research institutes, including RoCS - Rosseland Centre for Solar Physics and the WaLSA (Waves in the Lower Solar Atmosphere) international team. Bringing together a number of different and complementary expertises necessary to exploit data at different layers in the solar atmosphere.

- Thanks to a combination of high spatial resolution observations and state-of-the-art numerical modelling, it has been possible for scientists to discover that the magnetic field in our local star, the Sun, can resonate with a wide spectrum of magneto-acoustic frequencies, explains Jafarzadeh.

- What is particularly useful about the findings?

- Stars are known to resonate like giant spherical drums. Similar to earthquakes, these oscillations allow us to infer information about the subsurface layers through the application of seismic inversion techniques.

These are not the only possible resonances in stars. Like a drum membrane or a guitar string, many harmonic resonances are excited simultaneously within a sunspot, which is a region of intense magnetic field, seen as dark spot on the surface of the Sun in visible light. These harmonic oscillations of the sunspot strongly depends on the physical condition and structure of its hot plasma and magnetic field, thus representing its unique “symphony”.

- What will the focus on further research be?

Numerical magnetohydrodynamic modelling has provided excellent agreement with the observations, paving the way to use such methodology in other contexts and applications including, for instance, local magneto-helioseismology in solar and stellar astrophysics.

These findings provide a foundation for future data exploitation, e.g., from the spaceborne Solar Orbiter, an ESA mission launched in 2020, the recently constructed ground-based Daniel K. Inouye Solar Telescope in Hawaii, and the next flight of the Sunrise balloon-borne solar observatory, being launched in summer 2022.

The identification and modelling of a spectrum of resonant modes in solar magnetic fields can lead to new applications in other fields of study, including, for instance, local magneto-helioseismology in solar and stellar astrophysics and in the modelling and investigation of stellar noise in exoplanet detection, especially for stars with extremely large spots, Jafarzadeh underlines.