Solar Orbiter catches a second comet by the tail

For the second time in its mission so far, the ESA/NASA Solar Orbiter spacecraft has flown through the tail of a comet. A mission that includes RoCS - Rosseland Centre for Solar Physics. 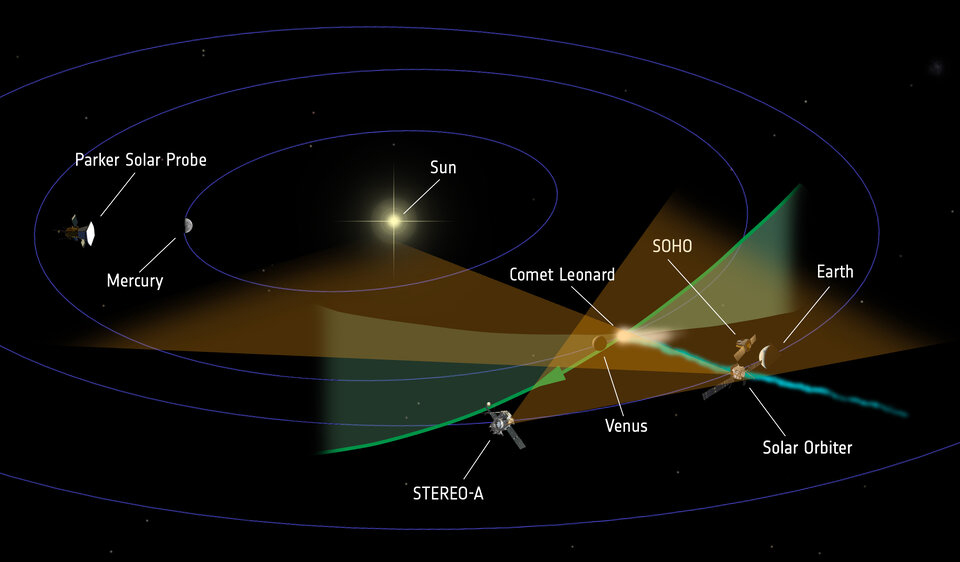 Predicted in advance by astronomers at University College London, UK, the spacecraft collected a wealth of science data that now awaits full analysis.

For a spacecraft designed to conduct unique studies of the Sun, Solar Orbiter is also making a name for itself exploring comets. For several days centred on 1200-1300 UT on 17 December 2021, the spacecraft found itself flying through the tail of Comet C/2021 A1 Leonard.

At the time of the crossing, Solar Orbiter was relatively close to the Earth having passed by on 27 November 2021 for a gravity assist manoeuvre that marked the beginning of the mission’s science phase, and placed the spacecraft on course for its March 2022 close approach to the Sun. The comet’s nucleus was 44.5 million kilometres away, near to the planet Venus, but its giant tail stretched across space to Earth’s orbit and beyond.

So far, the best detection of the comet’s tail from Solar Orbiter has come from the Solar Wind Analyser (SWA) instrument suite. Its Heavy Ion Sensor (HIS) clearly measured atoms, ions and even molecules that are attributable to the comet rather than the solar wind.

As a comet moves through space, it tends to drape the Sun’s magnetic field around it. This magnetic field is being carried by the solar wind, and the draping creates discontinuities where the polarity of the magnetic field changes sharply from north to south and vice versa.

Metis is Solar Orbiter’s multi-wavelength coronagraph. It can perform ultraviolet observations that see the Lyman alpha emission given out by hydrogen, and it can measure the polarisation of visible light. During 15 and 16 December it captured the distant head of the comet simultaneously in both visible and ultraviolet light. These images are now being analysed by the instrument team.

In March, Solar Orbiter make its closest pass to the Sun yet at a distance of 0.32 au (approximately one-third of the Earth-Sun distance, or about 50 million kilometres). It is one of almost 20 close passes to the Sun that will occur during the next decade. These will result in unprecedented images and data, not only from close up, but also from the Sun’s never-before seen polar regions.