"The ability to do world class research and collaborate with other European researchers while at the same time experiencing a new culture is what really drew me to Oslo." 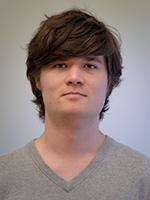 Mathew Galloway is Canadian. He did a Bachelors degree at McGill University ('13) and finished his PhD at the University of Toronto ('19).

– My PhD was in experimental astrophysics, focusing on the construction and flight of balloon-borne telescopes. That involved a lot more hands on instrumentation than my position here at ITA, but provided a background in a lot of the data analysis skills that I will be using over the next few years.

In October 2018 Mathew settled in Norway and started as a Postdoctoral Research Fellow in the Cosmology group.

Improving maps of the early universe

– I am working on improving the maps produced by the Planck satellite's Low Frequency Instrument (LFI). The final official Planck maps contains residual errors that are limiting our measurements of fundamental constants in the Universe, such as the optical depth to re-ionization (tau).

– What is your approach?

– We are developing an iterative data analysis pipeline that integrates and improves the existing Planck LFI analysis code to run quickly on a single cluster, allowing tens or hundreds of iterations to converge on the optimal LFI maps.

Norway: a great place to live

– [...] and work, according to international studies. The Institute of Theoretical Astrophysics also has the advantage of having several professors who are very knowledgeable about Cosmic Microwave Background (CMB) foregrounds, which is an aspect of the field which will only get more important over time.

– The ability to do world class research and collaborate with other European researchers while at the same time experiencing a new culture is what really drew me to Oslo.

– I am also excited to travel in Europe much more cheaply than I would be able to from Canada.

Part of the Christmas party committee

– What is your experience at ITA so far?

– The first period of being at the institute was great, everyone seemed very nice. I started working on our project almost right away, allowing me to really get on top of all the new responsibilities of being a postdoc.

Each year in Autumn the new arrived get heavily involved in the organisation of one of the most demanding events of the year: the Institute's Christmas party.

– Helping work on the Christmas party was a good way to meet some new people, and hopefully will continue to make more friends at the Institute.

I'm hoping that the ITA will help set me up for a future career in Astrophysics, allowing me to build important connections in the field (and publish papers), getting involved with several international collaborations as well as learning about the kinds of things that happen locally.