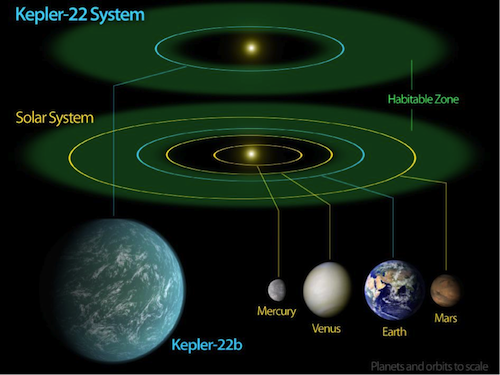 During the Kepler Science Conference, which was recently held at the NASA Ames Research Center (December 5-9, 2011), the existence of the extra-solar planet Kepler-22b was confirmed. The planet is very similar in size to our Earth, measuring 2.4 times the radius of Earth, and is in an orbit around a star, which resembles our Sun. Our Sun and the host star of Kepler-22b are both dwarf stars of spectral type G. The most exciting finding about Kepler-22b, however, concerns the distance to its host star. The planet is located in the so-called habitable zone (see Figure 1), where the surface temperatures are just right to theoretically allow for liquid water on the planet’s surface. This intriguing discovery inspired William Borucki, who is the principal investigator of the Kepler mission, to call Kepler-22b the "Christmas planet".

The existence of liquid water is thought to be an essential requirement for the formation of life, as we know it. The surface temperature on Kepler-22b is estimated to be around 22°C. Water could thus theoretically exist in liquid form on the planet's surface. The possible existence of liquid water on Kepler-22b has yet to be investigated. Currently, it is not even clear if the planet is a rocky body with a solid surface like our Earth. It may also be a gaseous planet like Neptune, which would be inhabitable.

The good news is that Kepler-22b is by far not the only promising candidate for a habitable planet around another star. Since it’s launch in March 2009, Kepler has discovered more than 2,000 new planet candidates (see Figure 2). Among them are several dozen possible candidates in habitable zones, which still have to be confirmed by follow-up observations. After three observed transits, which imply two complete orbits with a period of 290 days each, and additional validation with the Keck 1 telescope on Hawaii, USA, Kepler-22b is now the first of these candidates that has been successfully confirmed as a nearly Earth-size planet in a habitable zone.

Although finding over 2,000 new candidates in such a short time sounds like an impressive number, it may just be the tip of the iceberg. Kepler is pointed at the wing of the constellation swan (Cygnus), which is prominently visible on the Norwegian night sky (see Figure 3).  The field of view monitored by Kepler comprises only 1/400 (0.25 %) of the sky, which is roughly the area covered by your fist when held at arm's length towards the sky. The remaining sky certainly contains many more planets yet to be found.

Kepler is using the so-called transit method (see Figure 4) to detect planets that cross in front of their host star, just like we would see Mercury or Venus transiting the bright disk of our Sun. During the passage in front of the star, a planet blocks a small fraction of the star’s light. The star appears slightly dimmer for a short time. The Kepler satellite records this subtle change. The drawback of this otherwise fruitful method is that only planets are detected that pass exactly between the satellite and the star. Any planet orbiting a star in an inclined plane, which does not result in blocking light, will remain undetected. The true number of planets in the patch of the sky monitored by Kepler is therefore certainly much higher.

Looking for our terrestrial twin

Planets around other stars seem to be very abundant. Since the first discovery of extra-solar planets (first around a pulsar, then around a solar-type star) less than two decades ago, the number of known exo-planets literally exploded. Thanks to advances in instrumentation and measurement techniques, also Earth-sized planets are now discovered frequently (see Figure 5).

Kepler is not the only mission hunting for planets. Next to observations with ground-based telescopes, the COROT spacecraft is successfully looking for Earth-sized planets since 2007. COROT is a mission led by the French Space Agency (CNES) together with the European Space Agency (ESA) and other international partners. ESA’s GAIA mission will soon join the efforts. We can therefore expect a continuously growing number of planet detections in the future. The discovery of a true terrestrial twin with the potential of hosting life may be only a question of time now.

By Sven Wedemeyer
E-mail this page