For the first time torsional Alfvén waves have been directly observed in the solar corona by a team of researchers from the University of Oslo and the University of Warwick. The discovery sheds light on the origin of magnetic waves and their role in the heating of the Sun’s outer atmosphere, the corona. 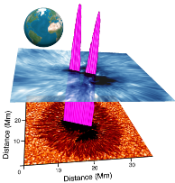 Solar physicists have uncovered how the Sun’s magnetic waves strengthen and grow as they emerge from its surface.

A "sunburst" from the early universe in 12 copies

Håkon Dahle (ITA/UiO) and his international team observed straight into the bright and hot heart of a galaxy 11 billion years old in no less than 12 multiple, gravitationally lensed images. The finding casts light onto a crucial era in our universe’s history: the epoch of reionization.

The Japanese Institute of Space and Astronautical Science has chosen for its next strategic mission LiteBIRD, a small space observatory. Six researches of the Institute of Theoretical Astrophysics are involved in the project. The gigantic telescope set to extract a range of the sun's secrets picking up radio waves. Stay tuned! Read more ...
Feed from this page
UiO > The Faculty of Mathematics and Natural Sciences >
Institute of Theoretical Astrophysics > Research >