A research stay on Svalbard to learn about data acquisition, processing, and interpretation using seismics and ground penetrating radar to image the subsurface, through a course offered by UNIS. 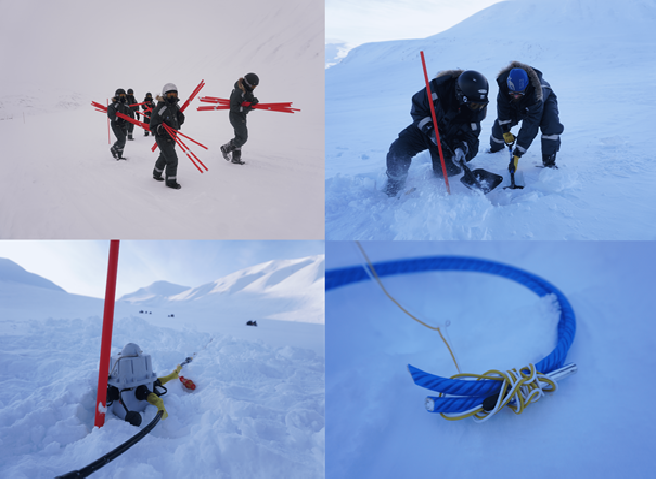 Before the first sunlight hit Longyearbyen, I arrived in Norwegian’s snow-covered arctic archipelago. The course started with a three-day training on field safety (e.g. setting up a field camp, emergency communication devices, and avalanche risks), rifle and flare gun handling, and snowmobile driving. We were now deemed ready to go into the field. Our field destination is a glacier called Tellbreen, about 40 km or an hour drive away carrying heavily loaded sledges with equipment.

During a week of fieldwork, we installed a seismic line consisting of 61 nodes (recording units, placed every 50 m), and 3 km strings of vertical geophones (displacement sensors). Every 500 m we also installed 3-component geophones, measuring vertical displacement as well as displacement in the horizontal plane. We laid out two parallel lines of explosive cords along the seismic line in 25 m sections: totaling to 120 shots fired. After all shots, we cleaned up after ourselves, and took all the equipment out of the field. Next to the seismic experiments, we also conducted experiments with ground penetrating radar (GPR), which is sensitive to the electrical permittivity of materials, and thus allows us to image the ice and ice-bedrock interface. Generally, we did not have great weather, with high wind speeds, and nearly an overnight stay in the field due to a blizzard, which is part of doing fieldwork in polar environments.

After the fieldwork, we were lectured on the different types of seismic waves and their dominance in different environments. We learned the theory behind the data processing and got hands-on experience with the seismic and GPR data processing. We learned how to filter and migrate the data to illuminate our waves of interest. In our case, these are the waves that are reflected from different interfaces in the subsurface. We could see distinct reflectors up to a few km into the subsurface, using active seismics. We also had a look at the 3-component geophones data and identified small earthquakes located along the spreading ridge in the North Atlantic northwest from Svalbard. Furthermore, from the processed GPR data we identified the ice-bedrock interface and potential sub-snow crevasses. We learned about different applications of seismics in polar environments, such as using surface waves to determine the degree of freezing in subglacial sediments.

It was an interesting learning experience of data acquisition in polar environments, and data processing and interpretation. We were surrounded by knowledgeable lecturers from UiO, UiB, NTNU, and UiT, and by motivated fellow students. It is an experience I will never forget, and I would like to deeply thank DEEP for giving me this opportunity!