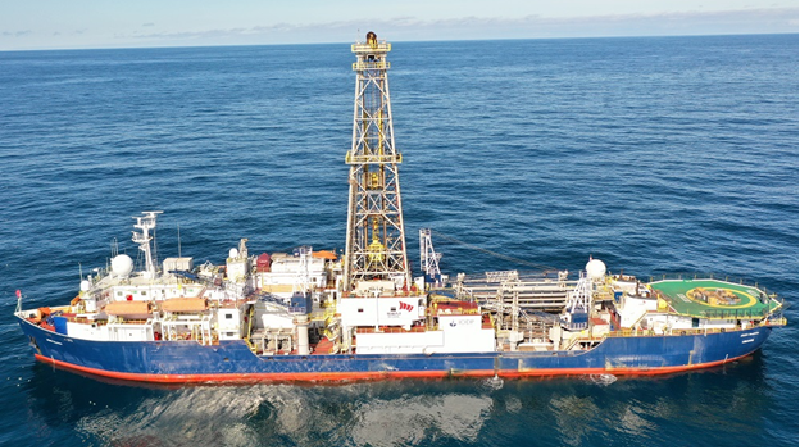 The International Ocean Discovery Program is a well-established international marine research collaboration of twenty-three nations, exploring Earth’s history and dynamics using ocean-going research platforms. Specifically, Earth’s subseafloor environments are studied through the recovery of data recorded in seafloor sediments and rocks. I participated as onboard scientist in Expedition 396, co-led by CEED’s Sverre Planke, that targeted the Magmatism of the Mid-Norwegian Continental Margin.

The aim was to investigate the nature, cause and climatic implications of excess magmatism as part of the northeast Atlantic continental breakup. In other words, was widespread volcanism in the North Atlantic the cause of a large release of CO2 into the atmosphere that resulted in a dramatic global warming event 56 million years ago? Within a short time span, the Earth climate system saw a 4–5 °C warming during the so-called Paleocene–Eocene Thermal Maximum that lasted for nearly 200 000 years. Given current emissions, this period forms a useful analogue to today’s climate change.

As the shipboard Physical Properties/Downhole Measurements Specialist I was involved with the collection and analysis of physical properties data acquired from core samples, in situ formation measurements, and downhole operations at each of the targeted sites. Deciding what data to collect and knowing exactly how the data were recorded is key to quantitative data analysis, in turn allowing for mathematical correlations between the different properties that constrain future geomodelling efforts. The latter forms a natural extension to my PhD project (UiO/UNIS/Norwegian CCS Research Centre) on carbon capture and storage and ties in neatly with the secondary Expedition 396 objective: to assess carbon storage potential of Norway’s offshore basalt provinces.

Although the expedition sailed with a reduced scientific party due to the ongoing pandemic, the expedition has been a great success: we successfully drilled every single site and more, and collected valuable material, data, and insights that form the basis for years of post-cruise research. I would like to thank the DEEP Research School for enabling my participation, Sverre Planke and Christian Berndt for being amazing expedition chiefs, and everyone involved for both their kindness and hard work over these past three months. It has been a blast.

By Peter Betlem
E-mail this page