My opportunity to collaborate with the magma research group at the Earth Science research laboratory of Orleans to perform high-temperature high-pressure experiments using an internally-heated pressure vessel. 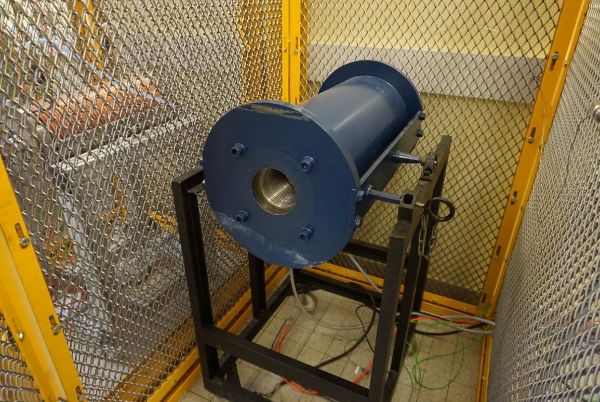 I went to the Earth Science research laboratory of Orleans in France to investigate the effect of water and oxygen fugacity on the sulfur solubility at sulfide saturation (SCSS) in mafic melts at a temperature of 1200 °C and a pressure of 2000 bars.

The motivations that drive the investigation on the behavior of sulfur in magmatic systems are mainly of economic and volcanological nature. The scavenging of chalcophile elements – Ni, Cu, Au and the platinum group elements (PGEs) into immiscible sulfide-oxide liquids is one of the key processes in the formation of magmatic sulfide deposits. Sulfur has also a geochemical key role in the monitoring of volcanoes. Due to its low abundance in the atmosphere volcanic emission sensors detect sulfur dioxide to yield insights into the degassing and eruptive styles of volcanoes worldwide. An increase in the knowledge on sulfur can contribute to an improvement in the interpretation of data collected by volcanic emission sensors and therefore advance the hazard risk assessment worldwide.

In order to investigate sulfur solubility of quenched glass samples the sulfide globules must be distributed in manner that allows for analysis of the glass between the globules. For this purpose, we performed experiments to establish the optimal conditions to subsequently investigate the effect of water and oxygen fugacity on the solubility of sulfur at sulfide saturation.

The experiments were carried out in internally heated pressure vessels (IHPVs), autoclaves which can operate at pressures up to 400 MPa and temperatures up to 1300 °C (fig. 1). Samples were spiked with different amounts of FeS, S and H2O and loaded into platinum capsules. The experimental duration was 3 hours to ensure equilibrium conditions and the samples were rapidly quenched to ensure the preservation of magmatic features. The platinum capsules were then cut in halve along the long axis, embedded in epoxy resin and polished for further analysis with an electronic scanning microscope (SEM) and an electron microprobe (EMP).

The experimental protocol is not yet resolved, several starting materials and several S and H2O contents has been tested. The first experiments produced samples that contained Pt (Fe)S alloys (fig. 2), instead of FeS sulfide melt. The sulfur content at PtS saturation has been measured in these samples and show a positive correlation with the amount of water loaded in the capsule. Next experiments will be performed with higher S contents in order to favor the segregation of a sulfide liquid instead of PtS.

I would like to thank the DEEP Research School for funding the unique opportunity to collaborate with the magma research group of the Earth Science research laboratory of Orleans in France and to perform exciting experiments.

PhD candidate at UiT – The Arctic University of Norway in Tromsø

By Paul Heckmann
E-mail this page