I was invited to attend a research trip organised by a group of Australian ore geology experts to the Broken Hill district, Australia. Broken Hill, discovered in 1884, is the largest Pb-Zn-Ag deposit in the world, and 250 million tonnes of high-grade ore has been produced from the 8 km long boomerang shaped ore body. The deposit is hosted by a sequence of metavolcanic to metasedimentary rocks in the Palaeoproterozoic Curnamona province, formed at about 1685 Ma. 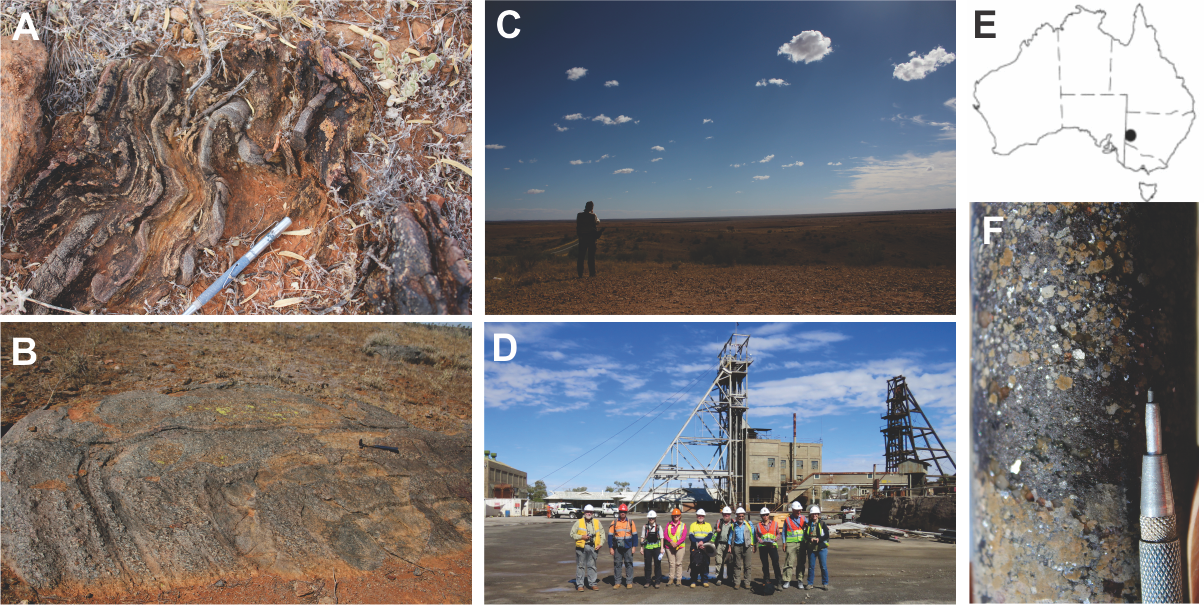 Figure 1 A) Complex folding in metasediments; B) Bedding is folded around the F2 fold in Sundown Group Metasediments that include psammite, psammopelite and pelite. After metamorphism the original sandy components still have the original sandy component while the original clay rich components are now represented by coarse sillimanite-biotite; C) view of the Mundi-Mundi fault scarp and onto the Mundi-Mundi planes; D) Group photo at the Perilya mine; E) Location map Broken Hill; F) core photo of metamorphosed  Pb-ore

The field trip focused on the controls to Pb-Zn-Ag mineralisation in a district characterised by polyphasal deformation and metamorphism. The key aspect of this trip was to review some of the findings from the past 30 years of reseach, and the analysis of the features within the Mine Sequence rocks well away from Broken Hill Mine, which might be used as a vector in other terrains towards additional mineralisation.

There were two guides on this trip; Barney Stevens, the former head of the Geological Survey of New South Wales who has spent the better part of 30 years mapping the region; and Graham Teale, a consultant petrologist and geochemist who presented a wealth of unpublished data which allowed us to understand the Mine Sequence rocks moving away from known ore bodies.

We started the field trip by looking at the host rocks close to the mine, and visited the Perilya core yard to look at core from the orebody they are currently drilling. We then subsequently moved further out from the mine and into the less metamorphosed terrains to understand the origin and environment of the deposition of rocks and ore. We also looked at the smaller ore bodies around the district related to the Broken Hill group rocks. There were talks given each evening after we returned from the field on various topic relating to the area, e.g. mineralogy, isotope signatures, exploration, metamorphic petrology etc.

My PhD here in Norway concerns pre-, syn-, and post polyphasal metamorphic metal occurrences, in the complexly deformed Archean to Paleoproterozoic basement rocks of the West Troms Basement Complex. This trip to Broken Hill was extremely useful as I got to see how both ore and associated host rocks deformed and remobilised during the polyphasal deformation. In addition, I participated in discussions with several highly experienced geologists on how they approach geological problems, from the detailed level of mineralogy, microstructures, and geochemistry to the larger picture regional stratigraphy and its applications as exploration vectors. This has aided me immensely in how I approach some of the geological puzzles that comprise parts of my PhD.

I am grateful to DEEP for providing me with the opportunity to travel to Broken Hill.

PhD candidate at UiT – the Arctic University of Norway