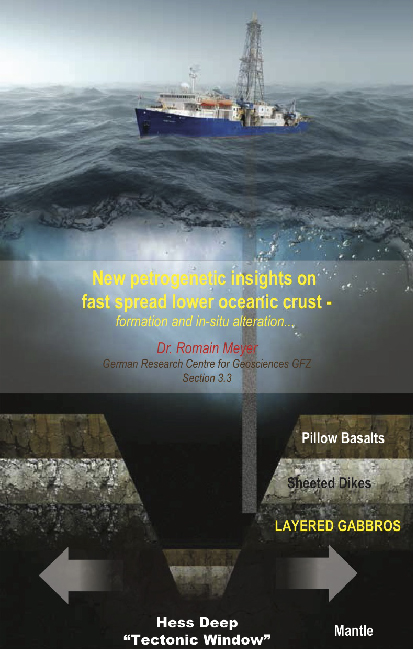 The formation and evolution of oceanic lithosphere at mid-ocean ridges is one of the dominant  in the chemical differentiation and physical evolution of our planet. The ~60.000 km long mountain chain represented by mid-ocean ridges is associated with 90% of Earth’s volcanism and ~25% of the heat released from the deep Earth. Theoretical models on magmatic accretion of the oceanic crust, thermal models, mass balance calculations for the whole oceanic crust, or general alteration models have been established only for fast-spreading systems. However, due to the lack of natural exposures or representative drill cores of the deep basement, these models have never been tested against natural samples up to date, which casts doubt on their reliability.
By sampling the first in-situ layered gabbros from an oceanic crust (Gillis et al. 2014, Nature) the IODP expedition 345 Hess Deep was tremendously successful. Igneous layering is a texture of plutonic rocks described from layered intrusions, ophiolites and now in-situ fast-spread oceanic crust. A solidified layered igneous cumulate results from complex interactions between physical and chemical processes both during and after the fractional crystallization of a melt. Thus these cores provide the first direct window into the accretion history of the lower oceanic crust. EMPA, LA-ICP-MS and structural results on the igneous petrogenesis of a high resolution sampling strategy will be presented during the talk (Meyer et al. in prep.). Furthermore, an additional significant first-order observation from IODP Expedition 345 is, that orthopyroxene is found as an abundant phase in many of the layered primitive gabbroic rocks: 58 out of 143 thin sections described during the cruise contain more than traces of orthopyroxene. This petrological paradox will also be discussed within the talk.
Finally the oceanic crust is the largest boundary zone between the Earth’s mantle and hydrosphere, and seawater-rock interaction in the oceanic crust has an important role in Earth’s dynamics, in particular global geochemical cycling. Hydrothermal alteration of igneous rocks is one of the most conspicuous products of the water-rock interaction. Despite growing evidence from rocks tectonically exposed at the seafloor, the lack of samples collected in situ from the lower oceanic crust has hindered progress in understanding geochemical cycling. For example, questions remain about how deeply water can penetrate into the plutonic oceanic crust and how hydrothermal alteration proceeds in these lower oceanic crustal lithologies. We recently published first observations and characterizations on high- and low-temperature alterations (Nozaka et al., 2016 & in press.) of these lower oceanic crustal rocks. One key discovery is the occurrence of hydrothermal green spinel, corundum and diaspore. Although green spinel and corundum have been reported from ophiolitic metagabbros and pyroxenites and their origin and tectonic implications have been discussed, Nozaka et al. (2016) is the first study to report these aluminous phases from in-situ oceanic crust. To illustrate the low-temperature similarities and differences of serpentinization processes in different rock systems (gabbroic rocks vs. peridotites) recovered at the Hess Deep Rift I will present textural observations, micro-Raman spectroscopic analyses and electron probe microanalyses indicating, that most of the olivine-replacing serpentine in the gabbroic rocks lack the mixing with brucite unlike those in peridotites.