From University of Padova 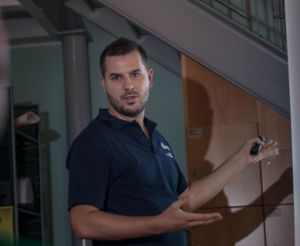 Lunar orbiters have mapped multiple deep pits on the surface of the Moon, believed to be ‘skylights’ into lava caves. These are of high scientific interest, offering access to pristine lunar material – perhaps even water ice deposits. Such caves might also become habitats for lunar settlers, offering natural shielding against radiation, micrometeorites, and surface temperature extremes. Remote sensing observation campaigns and planetary analogs sites exploration and analysis with state-of-the-art technology proved that the volume of stable voids in the subsurface of the Moon and of Mars could reach put to 2 to 3 orders of magnitude the size of their counterparts on Earth.

As a matter of fact, the renewed interest in the crewed and robotic exploration of the surface and subsurface of the Moon has significantly increased over the past few years among the scientific community and space agencies. The NASA Artemis program and the ESA EL3 (European Large Lunar Lander) represent new steps in this direction. Such exploration requires further technology developments in parallel with new landing sites characterization. In particular, the exploration of the lunar subsurface by accessing lava tubes from skylights has been subject for ESA call for ideas in its Open Space Innovation Platform in the SysNova Lunar Caves system studies framework. In this light we present some preliminary landing site assessments and design drivers for the DAEDALUS (Descent and Exploration in Deep Autonomy of Lava Underground Structures) mission design proposal, to be deployed in the Marius Hills region where a lunar skylight with underlying void has been discovered in 2009.

Developed by a consortium of Universities and SMEs and improved in the ESA Concurrent Design Facility, the 46-cm diameter DAEDALUS robotic sphere is designed to observe a lunar cave environment in full 360 degrees with the necessity to protect the interior from the harsh environment.  With innovative cameras acting as stereo vision system and LIDAR measurements, the sphere detects obstacles during its descent in the lunar cave and will provide, for the first time, 3D mapping and compositional information of planetary cave interior