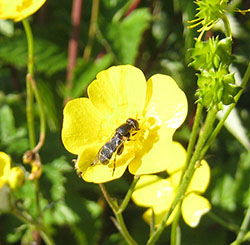 In recent years the reduction in density and diversity of pollinating insect has caused concern. Headlines on losses of bees in general and Colony Collapse Disorder (CCD) in particular, have appeared frequently in the media. This concern relates not only to the deterioration of the insect populations as such, but also to the sustainability of the wild plant communities which they pollinate. In addition, of more direct concern to the human population, insects are important agents in agricultural production through their pollination of entomophilous crops. In fact 35% of global food production depends upon animal pollination. In Norway crop pollination is important for the fruit and berry industry, but here it has rarely been studied. An increasing number of studies have identified negative effects of pesticides on bee behaviour. Behavioural changes in important pollinators, such as bumblebees, might have determental effects on bumblebee populations, ultimately having a negative effect on the ecosystem service they provide both in Wild plant communities and crops. The master students involved in the NEOPOLL project will help solving this puzzle by doing empirical research on bumblebee behaviour and accumulation of pesticides in the bumblebees. A novel aspect of this project is that we will conduct our pesticde exposure experiments under different temperature regimes to assess how other environmental factors might affect the toxicological responses.

There are currently no master projects available, but feel free to drop me an email to check if I might change my mind.

We seek persons with an interest for Ecology in a broad sense. We seek a student that can contribute to the design of the study and that can work independently in the field. A driver’s license is required. Knowledge on Norwegian plants and/or pollinating insects and an interest for species interactions and community ecology is an advantage, but we also welcome candidates with skills in statistics and numerical ecology. As the Project cis acollaboration between CEES and AQUA we are also interested in students With an ecotoxicological background.

The master students are expected to conduct independent research at an international level. All master theses are expected to be published in international peer reviewed journals. Doing a master degree is about learning to be a scientist and science is about independent skills but also collaboration. Being part of a larger research project demands cooperation and it is expected that the students collaborate among themselves as well as with the other researchers involved in the project.

For further enquiries please feel free to contact Anders Nielsen in office 3423 or through email anders.nielsen@ibv.uio.no. See also http://folk.uio.no/ for more information about the PolliClim project.