Parasites and Host Behaviour: Co-evolution from genotype to phenotype 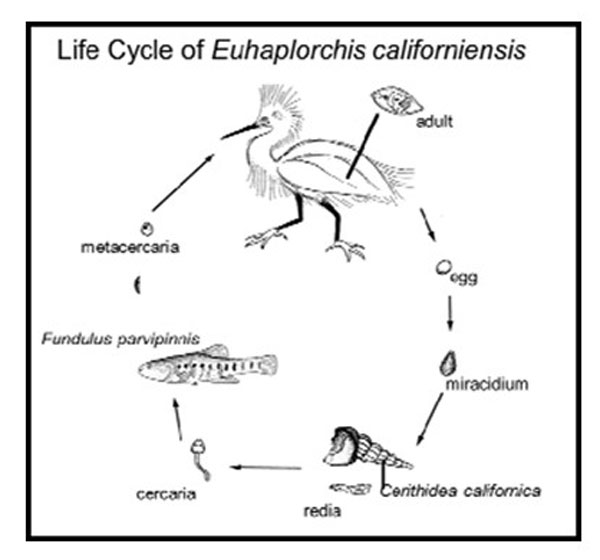 This project builds on and interacts with the RCN FRIPRO project entitled: Parasite control of host behaviour: Revealing a neurobiological mechanism for active manipulation (NEUROPAR, 2015-2018).

The purpose of this project is to facilitate the formation of an internationally competitive research group in the field of host-parasite systems biology. The introduction and testing of several fundamentally new concepts regarding evolutionary drivers and molecular-genetic mechanisms for parasite control of host phenotype is described.

A specifc aim is to identify genes coding for neuroactive signalling substances in the genome of the endoparasitic trematode Euhaplorchis californiensis, and thereby test a novel hypothesis: That parasites may acquire the ability to manipulate host phenotype by molecular mimicry or sequestration of specific host genes, as is known to occur for the purpose of immune evasion. A pipeline for genome-wide identification of candidate genes and screening for close hits in the genomes vertebrate hosts will be developed, which in turn will lay the grounds for testing another arcane idea: One main evolutionary driver for parasite mediated trophic transmission could be the energetic benefit of the final host, in addition to increased parasite fitness. In other words, hypothesize that parasitized animals demonstrating decreased anti-predator behavior fulfil the extended phenotype not only of the parasite but that of the predator.

The project has subsidiary aims. A zebrafish and a rodent-Toxoplasma gondii model will also be established to test the hypothesis that inherently reactive (= more flexible) phenotypes are more susceptible to manipulation.

Finally, field and laboratory studies of a Nordic species (Arctic char, Salvelinus alpinus) in order to reveal a possible novel case of manipulation of host physiology.

This is a multi-disciplinary project aiming to build a lasting collaboration between a network of partners that process expertise in integrative organism biology, physiology, evolutionary ecology, parasitology, and systems biology / bioinformatics.

The network is chosen to complement the specialisations by the PI and host institution, and will facilitate specific research tasks and provide critical input on study design, data analysis, and reporting.

Prof. Kjetill S Jakobsen (UiO-CEES) has a long time experience in evolutionary genomics, and has lead (and leads) several large genomic projects including sequencing of the Atlantic cod genome, the Aqua Genome Project as well as being director for the Norwegian Sequencing Centre (www.sequencing.uio.no). The CEES Centre of Excellence is a world-class scientific and vibrant environment with a multidisciplinary tradition, and known as a highly efficient centre for successful completion of large research projects. This partner is hosting a PhD candidate from the project in carrying out sequencing and genome-wide association studies, aided by dedicated bioinformatics specialists.

Professor Ryan Hechinger (Scripps Institution of Oceanography, UC San Diego) is a leading
specialist in the ecology of parasites and parasitism, focussing in particular on ecosystem effects and life history strategies and behaviours of hosts. He has a series of publications in PNAS (2015), PloS Biology (2013), Science (2011) and similar high quality journals. This partner will be responsible for collecting E. californiensis and host(s), while hosting a mesocosm study on predation rates and parasite impact on net energy gain by final hosts in ecosystems with and without manipulative E. californiensis, in which a post-doc from the project will have a central role.