Sensors for the rapidly growing commercial satellite market called new-space, and onboard signal processing for such sensors, is one of the avenues of research at the Centre for Space Sensors and Systems (CENSSS). 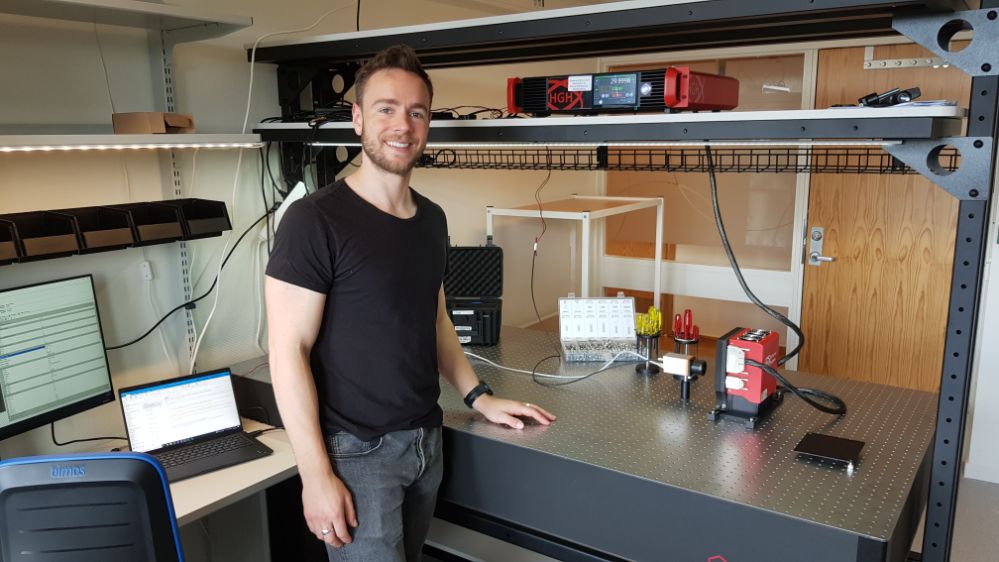 In this line of work, one PhD student is already hired, and a postdoc position will be posted later this year, to be followed by another PhD spot next year. In addition, Master´s degree students will contribute to this research.

There will also be opportunities for these students to collaborate with leading companies and organizations in the Norwegian space industry, such as EIDEL, the Norwegian Defence Research Establishment (FFI), Integrated Detector Electronics AS (IDEAS), Jotne AS, Norsk Elektro Optikk (NEO), Science [&] Technology (S&T) og Vake.

- For now we are primarily working with multi- and hyperspectral cameras for satellites, says professor Torbjørn Skauli, head researcher in space sensors at CENSSS.

Multispectral and hyperspectral cameras have color vision, but «see» different wavelengths than the human eye, for example in the near-infrared or the thermal infrared. A hyperspectral camera takes this to the extreme by seeing many tens, or hundreds, of spectral bands.

- Here, each pixel in the resulting image contains detailed information about how the light is distributed over different wavelengths, a spectrum. This spectrum is a fingerprint of the material we see in that pixel, which we can decode with computers, says Skauli.

Thus, multi-and hyperspectral cameras are of great interest to Earth observation. Here, satellites of different types and their various sensors are tools for researching and monitoring the Earth´s natural environment and large-scale systems. These include the atmosphere, the polar ice caps, the oceans, lakes and rivers, vegetation cover, and human land use.

- Multi-and hyperspectral cameras are also used in astronomy to view planets, stars, and galaxies, allowing us to collect rich information from objects that may be smaller than one pixel in the image, Skauli says.

Testing and characterizing a hyperspectral camera

- Our post-doc and students will initially be working with methods for testing and characterizing a hyperspectral camera, as well as a multispectral camera for thermal infrared wavelengths. This is useful in itself, and also very instructive work as a basis for selecting a camera to be included in a small satellite, says Skauli.

Both image resolution and imaging errors will be tested and characterized in detail, so that the researchers can know what the limiting factors for its data are and what may create errors in them.

The camera characterization work will be done in cooperation with the companies IDEAS and NEO.

-These innovative firms are at the global forefront of their fields, and the students will have the opportunity to work closely with them in this project, Skauli says.

- In addition to developing techniques to measure the performance of multi- and hyperspectral cameras, the student projects will also be part of the work to establish an international standard for characterizing such cameras, says Skauli.

His research in the field has contributed to the standard that is now being developed, and he is currently the vice chair of a working group under the Institute of Electrical and Electronics Engineers (IEEE) which is in the process to establishing this international standard.

- Somewhat surprisingly, specifications for hyperspectral cameras today do not give a complete picture of their performance, therefore the standard is awaited with significant interest, Skauli says.

A PhD student at CENSSS

Gard Selnesaunet has been at PhD student at CENSSS since late 2021.

- Currently I´m taking a few PhD courses at the Blindern campus of the University of Oslo, as well as setting up the new lab to test and characterize hyperspectral and thermal cameras at CENSSS, says Selnesaunet.

As he becomes increasingly familiar with the technology he will expand the testing and characterization of the camera technology in the lab.

- In the fall I hope to be part of the team that selects sensors for the small satellite that CENSSS is developing, what type of camera to use, and work on the testing and integration of this camera with the rest of the payload, Selnesaunet says.

According to current plans, the CENSSS satellite may be testing transfer of data from orbit to Earth by using light in the form of laser instead of radio waves, as most satellites do today.

- I wrote my Master´s thesis on semiconductors and took a course in camera and optical technology held by Torbjørn Skauli. Since we had compatible academic interests and Skauli was looking for a PhD student to work on multi- and hyperspectral cameras, I applied for the position at CENSSS. And that turned out to be the right choice for me, Selnesaunet says.

By Berit Ellingsen
E-mail this page