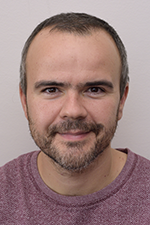 My research focuses on the field of computational catalysis. We use state-of-the-art methods for the calculation of quantum properties, including electronic structures and energy pathways for catalytic processes of high interest (e.g. artificial photosynthesis and CO2 reduction).

We use computational data to infer fundamental principles for the design of the next generation of catalysts, with enhanced activity, selectivity and robustness. Since 2018, the main research line focuses on the development of machine learning models based on quantum data. We are building highly accurate, transferrable and explainable ML models for catalysis (Balcells et al., Chem. Sci., 2020, 11, 4584).

I received my PhD under the supervision of Prof. Maseras at the ICIQ in 2006. My
thesis focused on the computational modeling of asymmetric catalysis, generating 11
publications. I had two postdoctoral positions, with Profs. Eisenstein and Lledós, in which I expanded my computational skills to the modeling of open-shell systems. In this period, I published two articles in JACS, which, together, collected more than 1,000 citations, being both recognized as ‘Highly cited in the field’ by the Web of Science. I moved to the University of Oslo and, in 2014, I had my first independent position with the support of an MSCA fellowship.

In 2018, I became a permanent Senior Researcher at the Hylleraas Centre of Excellence for Quantum Molecular Sciences, where I lead a group of seven people. The quality of my research was recently recognized by the 2020 Young Researcher Award of the Spanish Royal Society of Chemistry.