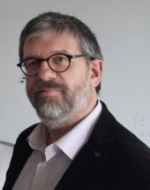 Affiliation: Center for the Earth Evolution and Dynamics (CEED), University of Oslo

I use first-principles molecular and lattice dynamics simulations to model numerically the behavior of matter at the extreme conditions spanned by planetary interiors. I work on silicate-based magmas, on minerals forming telluric planets (oxides, silicates and Fe-based alloys) and on planetary ices forming small satellites (water ice and salts) or giant worlds (ice and other molecular compounds). My research program covers a broad range of pressures and temperatures from the hot and dense supercritical state of the protolunar disk to the core-mantle boundary conditions inside the super-Earths and going all the way up to the interior of giant planets.

Currently he is also adjunct professor at CEED, University of Oslo. He is recipient of the Henri Buttgenbach Award of the Royal Academy of Sciences, Letters and Fine Arts of Belgium (2012), Research Excellence Medal of the European Mineralogical Union (2013), Ad Astra Award for Excellence in Research, Earth and Space Sciences (2016). He is a Carnegie Fellow (2004-2006), a Humboldt Fellow (2006-2008), and received an ERC Consolidator Grant for “IMPACT. The giant impact and the Earth and Moon formation” (2015).