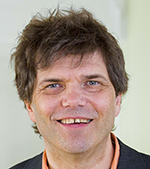 My main research interest is computational neuroscience, in particular on using methods from physics, mathematics and computer science to try to understand how neurons and networks gives rise to biological intelligence, that is, real thinking brains.

One particular focus of our group has been on computing brain signals, that is, linking activity in neurons and neural networks to what can be measured by recording electrodes placed inside (in animals) and outside brains.

He has been a co-leader of the Norwegian node of the International Neuroinformatics Coordinating Facility (INCF) since 2007, and has been a partner in the EU Human Brain Project since its start in 2013. He is active in popularization of science and is currently producing the podcast “Vett og vitenskap med Gaute Einevoll”.