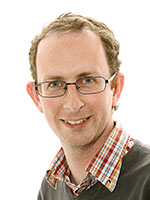 As part of the Experimental Particle Physics group I work on Grid middleware, which enables the distributed analysis and processing of data from CERN's ATLAS experiment along with other scientific experiments. I am mainly focussed on data management issues, such as optimising the data flow around the worldwide Grid, data caching, cataloging and storage.