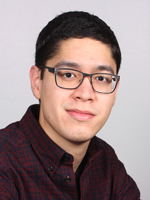 Planets, stars, and all of the particles (and people) we know and love only make up 5 percent of the Universe. This is both terrifying and incredibly exciting, as it means there's even more stuff to discover. Over the last decades it became clear that roughly 85 percent of the matter in our Universe is invisible to our eyes and telescopes. Commonly called 'dark matter', we can only indirectly observe its effects on other astrophysical objects, like galaxies, galaxy clusters and even our Universe as a whole.

Previously, summer student at CERN (LHCb) and the University of Bristol, and educational assistant at the Museum of Natural Sciences in Brussels. (Dinosaurs are cool.)