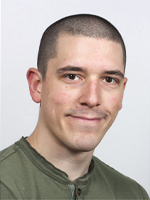 My scientific work focuses mainly on cross-disiplinary problems between physics and geology, and especially fluid-rock interactions at or near the Earth's surface. In particular, I study: