Sverre Holm was born in Oslo, Norway, in 1954. I got the M.S. and Ph.D (dr. ing) degrees in electrical engineering from the Norwegian Institute of Technology (now NTNU), Trondheim, Norway, in 1978 and 1982.

From 1978 to 1984 I did research in speech coding and spectral estimation at SINTEF (ELAB) and at the Norwegian Institute of Technology, and from 1984 to 1986 I was an assistant professor at Yarmouk University (now Jordan University of Science and Technology). I was a senior scientist at Informasjonskontroll AS, Asker, Norway, from 1986 to 1990. While there I led a study for the European Space Agency on Doppler acquisition algorithms for the Cassini mission to Saturn.

From 1990 to 1994, I was at Vingmed Sound (now GE Vingmed Ultrasound) doing R&D in digital beamforming and ultrasound probes as a member of the project team that won the Grand Prize of the 1995 Information Technology European Award prize for the digital ultrasound scanner "System Five". From 2000 - 2005 I worked part time with Sonitor Technologies. I hold patents for what is the basis for the ultrasound indoor positioning system described in Scientific American, Jan. 2008 as A Positioning System That Goes Where GPS Can't.

From 1989 to 1994 I was also an adjunct professor, until 1992 at the Norwegian Institute of Technology, then at the Center for Technology at Kjeller and later at the University of Oslo. From 1995 to 2020 I was a professor of signal processing in the Department of Informatics, moving to the Physics Department in 2020. I had an adjunct position at Simula Research Laboratory 2001 - 2004. From 2009 to 2014 I held an adjunct professorship at the Medical Imaging Laboratory of NTNU in Trondheim.

I am involved with several start-up companies, as a member of the board or as a scientific advisor. In 2009 I was part of a team that won the prize for the best idea from Oslo Science Park/University of Oslo.

I am an active blogger, in Norwegian on my blog at Titan at the University of Oslo and at Kollokvium.no, and in English on Science 2.0 as well as on radio hobby issues, since I have been a licensed radio amateur (LA3ZA) since 2001. 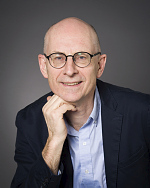