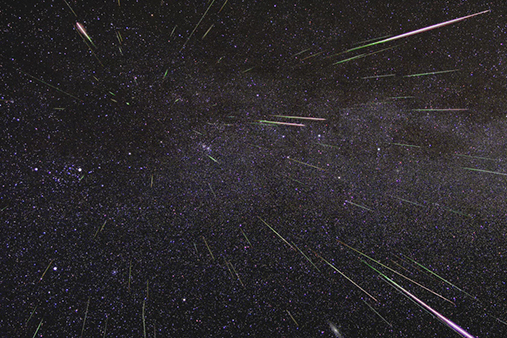 The Geminids are the most pronounced meteor shower with a zenithal hourly rate of 120 meteors (Correira et al., 2010). Only the Quadrantids are equally strong.

The Geminids reach their maximum activity during the night from December 13 to December 14. The activity increases gradually during the four days prior to the maximum, and decreases rapidly after that. Their entry velocity is about 35 km s-1 (Stober et al., 2012), and they ablate at altitudes between approximately 80 and 110 km. Meteors are the source of the metal layer that exists in this altitude region, called the mesosphere/lower thermosphere, and are also believed to be a source of meteoric smoke particles.

During the Geminids in 2010, the Norwegian Defence Research Establishment (FFI), UiO and the Leibniz-Institute of Atmospheric Physics in Kühlungsborn (IAP), Germany conducted the last of three ECOMA (Existence and charge state of meteoric smoke particles in the middle atmosphere) sounding rocket campaigns from the Andøya Rocket Range in northern Norway. The University of Oslo contributed with the Langmuir needle probe. All rocket launches were supported by ground-based measurements with lidars and radars. 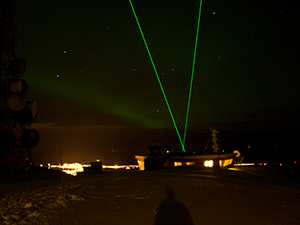 The laser beams at ALOMAR. The yellow beams from the sodium lidar are not strong enough to be visible. The green beams are from an RMR lidar that belongs to Leibniz-Institut für Atmosphärenphysik i Kühlungsborn, Tyskland. The town in the background is Andenes.

The goal was to investigate what effect a major meteor shower has on the abundance and properties of meteoric smoke particles. This study is mostly based on observations with the ALOMAR Weber sodium lidar, and it also includes data from radar observations and three sounding rocket launches. The sodium lidar measures sodium density, temperature and line-of-sight wind speed at altitude between 80 and 110 km.

Sporadic meteors occur at all times and can originate from every radiant angle. The shower meteors, however, originate from one specific radiant angle. Therefore, they can be distinguished from sporadic meteors. During the time of the Geminids in 2010, almost 50% of all measured meteors originated from the Geminids radiant (solar longitude 262°) at Andøya. Thus, one might expect major meteor showers to have a substantial influence on the composition of the middle atmosphere, i.e. the region where they ablate.

We found that the Geminids do not have a noticeable effect on the sodium number density. The sodium column density decreased steadily during the three weeks when we conducted our measurements. Radar measurements show that the number of sporadic meteors decreased during December 2010. This correlates well with the time series of sodium column abundance.

We compared the data from 2010 with data collected in 2009 and 2011. Similarly, we see no sign of a Geminids influence on sodium column density in these years. Surprisingly, the sodium column abundance during December 2010 was much smaller than the climatological winter average. 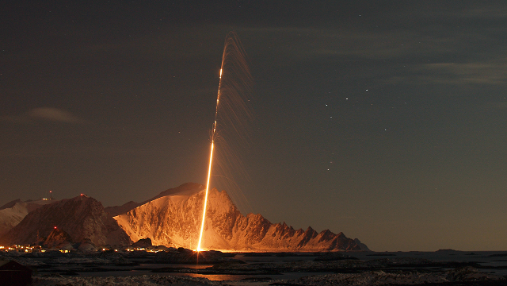 It seems that this meteor shower has little or no influence on the abundance of sodium and meteoric smoke particles. Instead, sporadic meteors seem to be more important.

By chance, the lidar detected two meteor trails. This possible when a meteor ablates in the atmosphere and its “signature” is measured as a sharp increase in sodium density. From these two meteor trails, we estimate the daily global meteor flux to be 20 t d-1. This is only correct if the meteor flux does not vary with time of year nor latitude. This value is in very good agreement with the largest possible meteor flux to yield realistic sodium column densities and eddy diffusion coefficients (Plane, 2004).

The Norwegian Defence Research Establishment (FFI), the Norwegian Space Centre and the Research Council of Norway supported the Norwegian half of the ECOMA project. The ALOMAR Weber sodium lidar is owned and run by the University of Tromsø, the Andøya Rocket Range and GATS, Inc. in Boulder, CO, USA.

Our article “Development of the mesospheric Na layer at 69°N during the Geminids meteor shower 2010” by Dunker et al., 2012 has just been accepted by the journal “Annales Geophysicae”. The ECOMA campaign 2010 resulted in more than ten scientific articles, which will be published as a special issue of the journal with the title “Structure, composition, and dynamics of the middle atmosphere and lower ionosphere during a major meteor shower”.

The article will soon be available on the journal's website.

More information on the ECOMA campaign