UiO The Faculty of Mathematics and Natural Sciences Department of Physics
Main navigation
Back to uio.no
Sub navigation Menu
Research > Research projects from A to Z > BATE > Thermoelectrics

Imagine that one side of a long rod of a N-type or P-type semiconductor is heated, while the temperature at the other side is maintained at a lower temperature T (Figure 1). The electrons and holes move faster (and have a lower density) at the hot side, resulting in diffusion of electrons/holes towards the cold side. An electric field is then set up across the rod due the diffusion of charge carriers. This is called the seebeck effect and the voltage found for a temperature difference, ∆T, under thermodynamic equilibrium is α∆T where α is the seebeck coefficient. 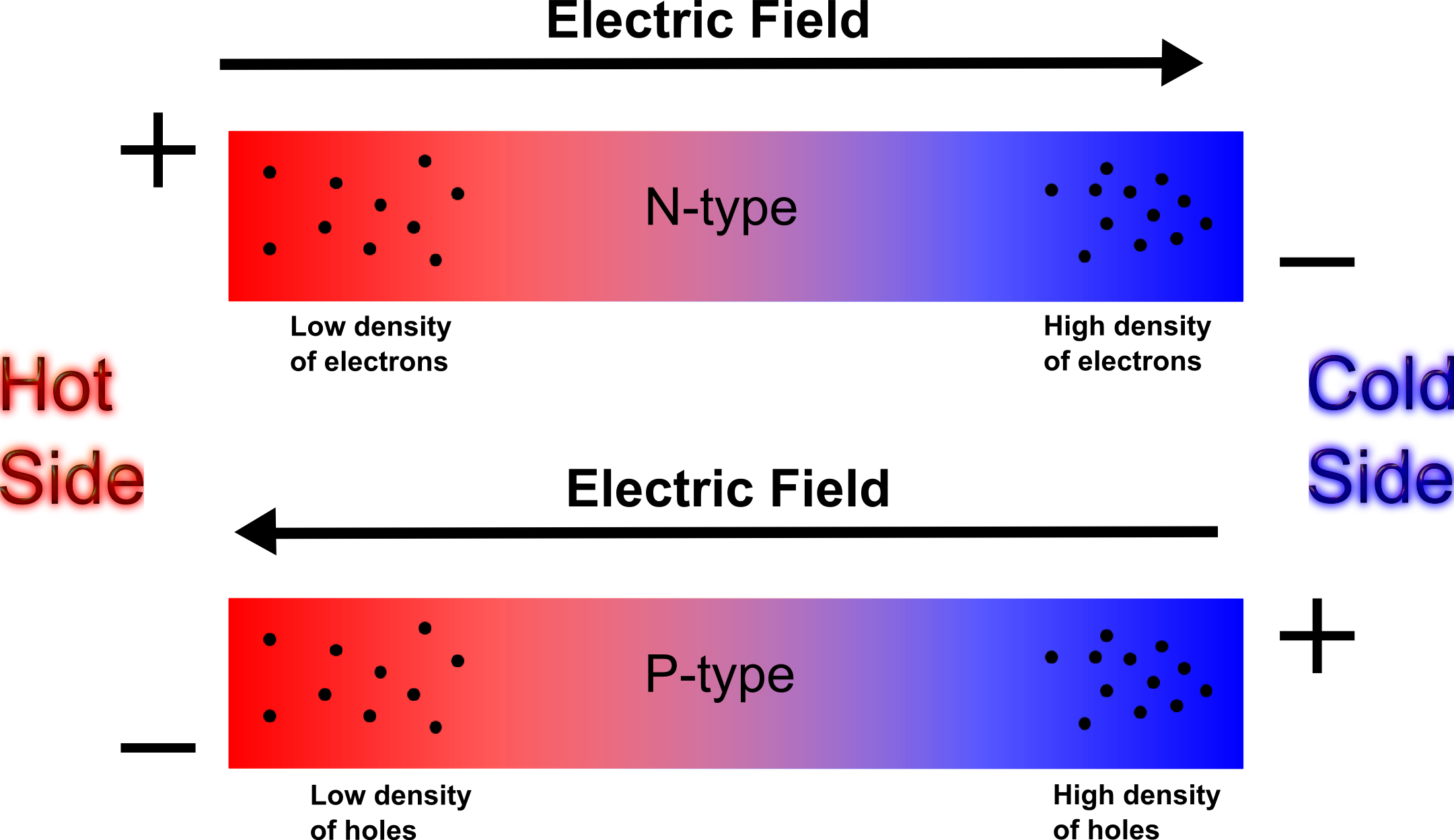 Another way of defining the seebeck coefficient is entropy transport per charge carrier divided by the charge. If an electric current is sent through the rod the charge carriers will transport heat in the direction of the electric current, resulting in heating at one end and cooling at the other end of the rod. This is called the peltier effect and the peltier coefficient (π) is defined as π=αT.

The electric field due to a temperature difference across a material results in a positive voltage for a P-type material and negative voltage for a N-type material with respect to the hot side. Thermoelectric modules are therefore usually constructed by connecting pairs of P-type and N-type materials in series as shown in Figure 2. If a current source is attached to this module it will result in cooling at one side and heating at the other side. Conversely, it can generate electricity if a temperature difference exists over the module.

where σ is the electrical conductivity, κ is the thermal conductivity and T is here the average temperature. The efficiency (η) of a thermoelectric generator is approximately

where Th and Tc are the temperatures at the hot and cold side. The fraction of the heat energy converted into electricity is in the region of 10%.

where I is the current, R is the resistance and K is the thermal conductance. If 20 oC of cooling is required the COP would typically be in the region of 2. For comparison, a conventional refrigerator under the same circumstances has a COP around 14. The maximum temperature difference possible for a thermoelectric cooler, ∆Tmax, is often around 50 K.

For a temperature difference of 20 oC the COP for a thermoelectric heat pump would typically be 3, which is comparable to the COP of conventional heat pumps.