ANSAT and NAROM arranged a CubeSat workshop at Andøya Rocket Range on november 23.-24 2009. Both students from HiNCube at Narvik University College and from CubeSTAR in Oslo participated. The main focus for this workshop was attitude determination and control, but other relevant topics was also covered for status and information exchange between the current two student satellite projects in Norway. April 2009, CubeSTAR student Johan Tresvig attended the annual Cubesat Developers Workshop held at California Polytechnic State University (Cal Poly) in San Luis Obispo in California. The workshop lasts for 4 days, where the participants get an opportunity to meet with other Cubesat teams and the space industry. Johan also presented the CubeSTAR project on this workshop. 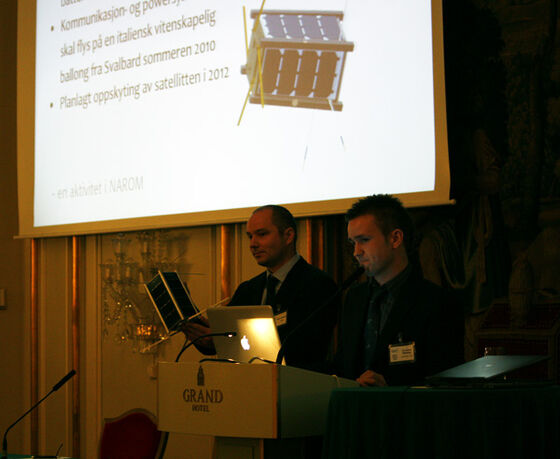 On 9 February the CubeSTAR student satellite was presented on the annual Space Dinner, arranged by NIFRO at Grand Hotel in Oslo. Jøran Antonsen from NAROM gave a presentation on the Norwegian student satellite program, and Tore André Bekkeng presented CubeSTAR and it's scientific instrument, the multi-Needle Langmuir Probe.

NIFRO is the Norweigan forum for space industry, and Space Dinner 2010 gathered more than 100 participants from both industry and the government in Norway.

The focus of this workshop was the COMM and EPS subsystems, with four students from UiO/CubeSTAR participating.

In addition to students from HiN/HinCube, the enthusiasm and expertise of Wouter Weggelaar from ISIS added weight to this workshop, which also included an inspiring lecture on satellite communications in which retired Prof. Gunnar Stette from NTNU could draw from his vast experience in the field.

The first day included student presentations of the COMM and EPS subsystems and also a brief technical demonstration of the COM system, while the second day was spent trying to establish a communication link between the COMM subsystem and Andøya Ground Station.

Feed from this page